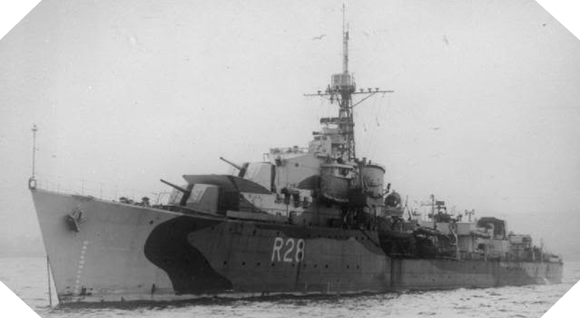 This Class V destroyer was launched on 22 April 1943 and entered active service on 10 December of the same year. Baptized HMS Verulam, it is deployed in the English Channel and in the North Sea in the 26th fleet of destroyers after its sea trials in order to carry out patrols and escorts.

In May 1944, as part of the preparation for Operation Overlord, it joined the Bombarding Force D, which was itself subordinate to Task Force S. It participated in Exercise Fabius on 3 May, the general rehearsal of the amphibious operations in Normandy. The Verulam escorts the S7 convoy across the English Channel on the night of 5-6 June 1944 to Sword Beach. On D-Day, it participated in the fire support of the Allied troops landing at Lion-sur-Mer and patrolled in the area until June 27 before joining the North Sea.

In January 1945, HMS Verulam was renovated to prepare for its engagement in the Indian Ocean and the Pacific, which was effective in March. It carried out several missions of escort and patrol against the Japanese maritime and air forces until the end of the Second World War.

Returning to the United Kingdom, it served in the 3rd fleet of destroyers before being transformed into an anti-submarine frigate in 1951. Two years later, Verulam returned to service from 1958 1970 in favor of experiments on the effects of new armaments. On September 1, 1972, it was sold for being scrapped.