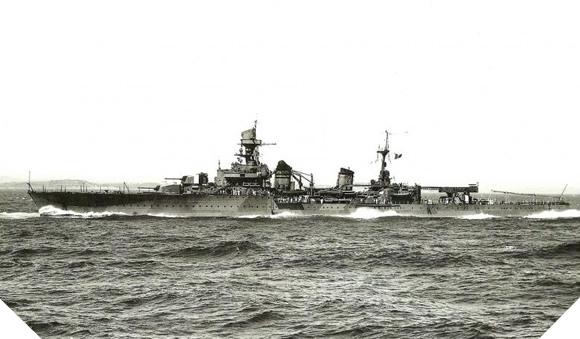 The Montcalm cruiser is a French light cruiser built at La-Seyne-sur-Mer and launched on October 26, 1935. It entered service on December 4, 1937. Incorporated in the 4th division of cruisers of Brest, it participated in patrols and escort of convoys in the Atlantic Ocean after the outbreak of the Second World War. Engaged in the Norwegian campaign in April 1940, it evacuated Allied forces from Namsos and then entered the Gulf of Guinea, where it took part in the defense of Dakar against the British warships in September 1940, before joining the allies ranks.

Modernized in the United States in January 1943, the Montcalm cruiser is immobilized until August. Deployed in the Mediterranean sea, it was engaged during the operations of Corsica in September. It was then deployed in the Atlantic Ocean where it carried out many patrols and convoys escorts.

Deployed in the English Channel in the spring of 1944 as part of Operation Neptune, it was integrated into the bombardment force C. In the early hours of 6 June 1944, it was anchored off Omaha Beach in the company of the French Georges Leygues cruiser. Participating in the bombing of Omaha Beach and then in fire support missions for the benefit of the Allied land forces, it was deployed in August in the Mediterranean sea to participate in the landing of Provence and the capture of Toulon. From September 1944 to March 1945, it supported by the fire the 7th American army advancing in the north of Italy.

After the war, the Montcalm cruiser remained the flagship of the 4th Division of Cruisers. It carried out numerous missions and multiple exercises in the Mediterranean sea and along the African coasts before being renovated for almost a year from 1951 to 1952.

Placed in reserve in May 1957, it served in 1959 for a period of ten years at the School of Submarine Weapons. On December 31st, 1969, it is permanently removed from any service.