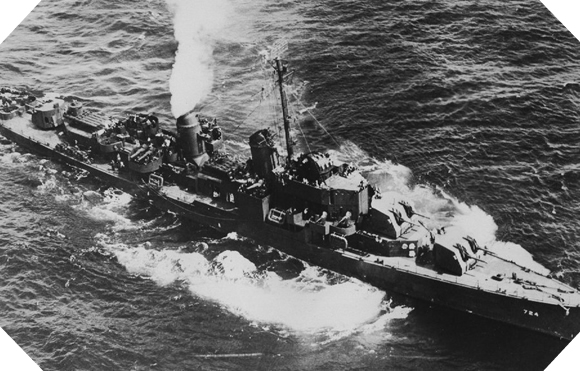 The USS Laffey was launched on November 21, 1943 and entered service on February 8, 1944. After a series of offshore training, it left the US territorial waters and arrived at the port of Plymouth on May 27 to participate in the Operation Neptune.

Integrated within the naval force U, it escorts the allied invasion fleet off Utah Beach. On June 6, 1944, it participated in the bombing of the German positions and at the same time ensured the safety of the other warships in the area. In the days that followed, it reinforced the naval fire support for the US ground forces operating in the Cotentin before hunting German submarines on 12 June. After being refueled in Plymouth and then in Portsmouth, it participated on 25 June in the attack of the German batteries defending Cherbourg in the bombardment group 2. Touched by an unexploded enemy shell, it left the area on the same day and returned to United States to receive new electronic equipment.

USS Laffey was engaged in the Pacific fighting in November 1944 in Task Force 38 and patrolled in the Philippines. On 11 November it saved a wounded Japanese pilot who had fallen into the water with his parachute. With the 7th Squadron, it participated in the landing of Ormoc Bay on December 7, then in Mindoro on the 12th with the support group 77.3. It also participated in the Battle of Iwo Jima in February 1945 and at the Battle of Okinawa the following month.

During the raid carried out by fifty Japanese aircraft on 16 April, it was targeted in particular: two aircraft hit him at 8.30 am and five more at 8.42. To get him out of this disastrous situation, it was supported by four FM-2 Wildcat, including Carl Rieman, who knocked down three Japanese planes in one minute and then twelve Vought F4U Corsair. An enemy aircraft, hit by a Corsair and the anti-aircraft guns of the Laffey, crashed into the sea after striking the destroyer’s mast, immediately followed by the same Corsair whose pilot was saved. A new Japanese bomb hit the Laffey and destroyed a 40 mm gun, killing its servants. In total, six suicide bombers crashed on the destroyer commanded by Captain Becton and four bombs hit him: 32 crew members were killed and 71 others wounded.

Severely damaged, it is towed to Okinawa for repair. Operational in September, it collides on September 11 with the PC-815 which loses one of its crew members.

In 1946, the Laffey destroyer participated in the scientific tests of the atomic bomb during Operation Crossroads before being retired from service on June 30, 1947. On January 26, 1951, it was reactivated to participate in the Korean War. January 1952 in Task Force 77. It then took part in numerous maritime exercises and witnessed the fighting for the Suez Canal in November 1956, while it was in the Mediterranean sea with the 6th American fleet. It carried out numerous missions on the various oceans of the globe before being definitively withdrawn from service on 29 March 1975.

The USS Laffey is now preserved as a memorial in Charleston, South Carolina.