History and photos of the landing beach

Utah Beach is one of the two American landing zones in Normandy. This beach was created by British general Bernard Montgomery who wished to establish a beachhead directly in the Cotentin peninsula in order to capture Cherbourg faster, because of its deep water harbor and its major logistic importance.

There are two sectors on Utah: Uncle Red and Tare Green, located between the towns of Les Dunes-de-Varreville (North) and La Madeleine (South). These beaches are defended by the 709th german infantry division which has installed seven strongpoints. Two coastal artillery batteries, located at Montebourg and Saint-Marcouf, can open fire on this beach, since these guns have a firing range of almost 30 kilometers.

The 7th U.S. Army of Major General J. Lawton Collins will be engaged first. It is composed of the 8th, 22nd and 12nd infantry regiments of the 4th american infantry division led by Major General Raymond O. Barton. These units will launch the attack of Utah Beach on D-Day in order to capture the landing beach sectors, then to establish a solid beachhead and to carry out the junction with the airborne troops of the 82nd and 101st American airborne divisions.

The assault must take place early in the morning at 6.30, a timetable that corresponds to the lowest tide. The Allies voluntarily choose this moment because the defenses of beaches installed by the Germans are clearly visible at low tide. Thus, the engineers can clear breaches on the beach in order to disembark the reinforcements.

Tuesday June 6, at 3 o’clock in the morning, the U fleet (Utah) arrives near the Cotentin beaches and damps at approximately 18 kilometers off the coast, a distance which limits the effectiveness of the German coastal batteries.

The sunrise comes at 05:58 a.m. exactly, 28 minutes after the beginning of the bombardment of the German positions by the allied warships. This huge bombardment follows air raids carried out by thousand of allied bombers.

American soldiers of the 1st and 2nd Battalions (8th Infantry Regiment, 4th Infantry Division) who have embarked into the landing crafts are witnessing these bombardments which plow the French soil and fill the sky with immense plumes of smoke. Even though many of them suffer from a terrible seasickness, they are relieved to see their objectives under such a rain of steel.

But the amphibious tanks are falling behind and are soon overtaken by the landing craft of the 2nd Battalion which take the lead of the offensive on the beach area nicknamed “Uncle Red”.

During the first minutes of the 4th Infantry Division’s landing on Utah Beach, the German shots are numerous but not very precise. Gradually, German machine guns leave room for random but deadly explosions of shells fired by field guns belonging to the German 709. Infantry Division.

These guns open fire from positions a few kilometers west of the landing beach (notably near Brécourt manor) and are camouflaged so that the Allied aircraft patrolling the Norman sky do not spot them.

Very quickly, the beach is under control. The tide is low and discovers the beach defenses over a distance of nearly 300 meters between the dunes and the sea. The fifth assault wavelands half an hour after H Hour. At 7:30 am, engineers open gaps through the beach obstacles allowing the landing crafts to approach without a hitch. 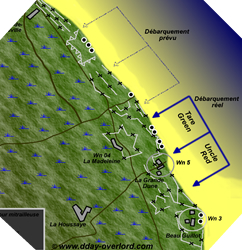 Brigadier Theodore Roosevelt Jr., eldest son of US President Theodore Roosevelt, landed with the first assault wave. Major General Raymond O. Barton quickly realized, after discussing with his staff officers, that the sea current had deported the assault boats and that the American soldiers disembarked 2 kilometers south of the originally planned point on the invasion plan. Indeed, they are not north of the Madeleine as planned but to the south of this village, facing the German W5 strongpoint.

Only one road leads to the inland from this area of the beach, while to the north of this site there are three more. The question is posed: will the reinforcements land on the beach provided by the plan or will they land south of the village of Madeleine? Barton indicates that the reinforcements must follow the assault troops whatever the landing point.

Attempts to break into the north were repulsed by the German forces, supported by the firing of the Montebourg and Saint-Marcouf batteries. Major General Barton decides to advance inland by using this only road, despite the risks of congestion. Indeed, 30,000 American soldiers and 3,500 vehicles must be landed on Utah Beach during the day, and the simple country road, isolated between marshes, seems insufficient to support such a force.

Meanwhile, American tanks are waiting for military engineers to destroy the anti-tank walls before continuing their advance. Two hours after H-hour, at 8:30 am, they cross the dune and move inland.

While small arms fire has become rare on the beach, mortar explosions and German artillery continue to kill. This desperate harassment by the Germans continues until the end of the evening.

Review of the landing

Amphibious tanks have provided essential support on this beach, providing immediate fire support for the infantry at the initial stage of the landing (during which the balance of power is particularly unfavorable for the attacker) and when progressing to the inland. The Germans were impressed by the landing of tanks, which seriously undermined their morale and reduced their fighting value. 28 of the 32 tanks planned for the first wave attack managed to land, clearing the German support points with a large firepower.

At the end of the day, the landed troops carried out their junction with the airborne troops of the 82nd and 101st american airborne divisions. The landing on the sector of Utah Beach is the most successful one of the five allied beaches in Normandy.