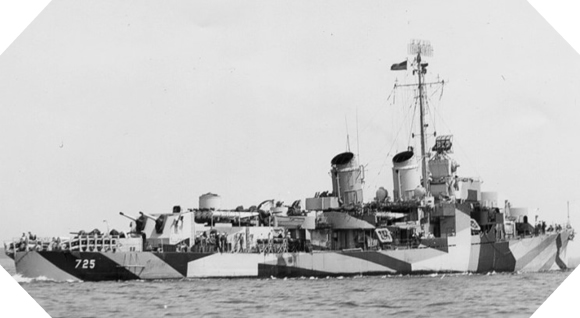 The USS O’Brien was launched on 8 December 1943 and entered service on 25 February 1944. After training at sea, notably in Bermuda, it left the United States on 14 May 1944 to join Scotland in order to participate in Operation Neptune.

Integrated with the naval force O, it escorted the warships and troop transports across the English Channel during the night of June 5-6. At the dawn of D-Day, it took part in the bombing of German positions on Omaha Beach until nightfall and in the days that followed. Protecting the allied armada against possible incursions of submarines or German torpedo boats, it was also used on June 25 to reinforce the bombing group ahead of Cherbourg: opening fire on the German batteries, its shots are so precise that the opposing artillerymen aim in particular at the O’Brien rather than the big battleships like the USS Texas. Touched by a direct hit that killed thirty-three and injured nineteen, this does not prevent it from accomplishing its mission until the late afternoon.

Returning to the United States for major repairs, it was finally transferred to the Pacific in December 1944, specifically in the Philippines at 7 Wing. It tried to extinguish many fires on transport ships hit by suicide bombers and was hitself hit by one of them on 6 January 1945. Slightly damaged, it could continue its missions, notably taking part in the battle of Iwo Jima. On March 27, a new suicide bomber struck the O’Brien exploding the ammunition dump: fifty crew members were killed or missing and sixty-six were wounded. The destroyer was then repaired until the summer.

In mid-August 1945 it joined the 3rd Squadron and patrolled in Japanese territorial waters as well as the rest of the Pacific before being retired from service on 4 October 1947. But when the war in Korea broke out, the O’Brien was reactivated on 5 October 1950 and became the flagship of the 132nd destroyer squadron. Joined in Task Force 77 in March 1951, it participated in the siege of Songin and the Battle of Buzz-saw. Declared sunk by Radio Moscow, it reached Korea with the Task Force 95 after some repairs.

Modernized in the United States in 1961 to be able in particular to refuel a flying helicopter, it patrolled with the 7th squadron near Taiwan. On November 22, 1965, during the Vietnam War, it provided fire support for a regiment of South Vietnam. This type of operation is repeated several times, especially during the Double Eagle operation. Admiral flag during the Sea Dragon operation, it destroyed or damaged some twenty ships destined to supply North Vietnam with weapons and equipment. On December 23, 1966, it was hit three times by a coastal battery north of Dong Hoi, killing two sailors and wounding four others. It is still caught under the lights of coastal batteries seven times after this incident. It is committed until 1971 off the coast of Vietnam.

Facing multiple problems related to its duty period (29 years with three high-intensity conflicts), it was placed in reserve on 18 February 1972 and deliberately destroyed on 13 July during a shooting exercise off California.