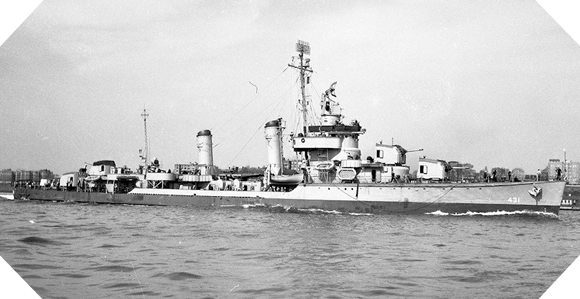 The USS Plunkett was launched on 7 March 1940 and entered service on 17 July of the same year. After a series of offshore training, he patrolled and escorted convoys in the North Atlantic and the North Sea alongside the British navy.

In November 1942, he took part in Operation Torch off Morocco and then escorted new convoys in the Mediterranean. In July 1943, Plunkett participated in Operation Husky off Gela. On January 24, 1944, at 1738 hours, while escorting a convoy between North Africa and Naples, German light Junker bombers 88 took the destroyer as target: a 250-kilogram bomb kills twenty-three sailors, twenty-eight are missing and many others ae wounded. Fires are reported on board but are quickly checked: the USS Plunkett is repaired in the port of New York.

On May 5, 1944, it left the United States and arrived ten days later in Belfast to participate in Operation Neptune. Integrated with Naval Force O, it escorted the warships and troop transports to Omaha Beach on the night of June 5-6. On D-Day at dawn, it participated in the bombing of German positions and made fire support for American land forces until June 25: integrated to Task Force 129, it took part in the bombing of coastal batteries of the city of Cherbourg.

In July, it joined the Mediterranean sea in order to be involved in Operation Dragoon, the landing of Provence, south of France. Returning to the United States on 16 January 1945, it was on his way to the Pacific when the Japanese signed the armistice.

Removed from service on 3 May 1946, it was transferred on 16 February 1959 to the Navy of the Republic of China. Renamed Nan Yang, it was used until 1975 and was demolished the same year.