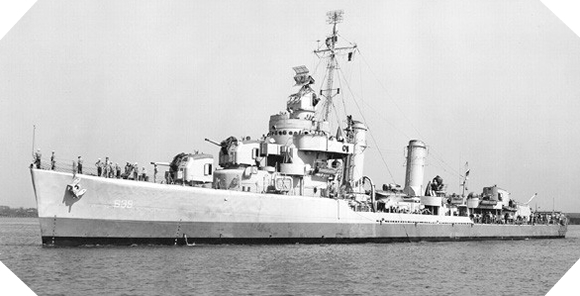 The USS Shubrick was launched on April 18, 1942 and entered service on February 7, 1943. After a series of offshore training, it carried out a convoy escort to North Africa and then prepared to participate in July 1943 to Operation Husky off Sicily. After the landing at Gela, it escorted new convoys in the Mediterranean Sea. Touched during an air raid on August 4, nine sailors were killed and twenty others were injured: towed to Malta, it was finally repaired in New York.

Returning to active duty in January 1944, it escorted two new convoys across the Atlantic Ocean before joining Belfast. It then joined the naval force U as part of Operation Neptune and received the mission to escort the USS Nevada to Utah Beach on the night of June 5-6. On D-Day at dawn, he participated in the bombing of German positions and made fire support for American land forces until June 25, when it took part in the bombardment of the coastal batteries of the city of Cherbourg. The Shubrick left Normandy on July 11 and then joined the Mediterranean Sea in order to be involved in Operation Dragoon, the landing of Provence, south of France.

Returning to the United States in September 1944 to be renovated, it joined the American Pacific fleet on 1 February 1945. Escort of the USS Mississippi during the Battle of Okinawa on April 21, it was targeted by two Japanese suicide bombers on 29 May: one of them managed to reach it and the Shubrick began to sink. Thirty-five sailors were killed or missing and twenty-five others were injured during the attack. Considering that the destroyer was unrecoverable, the American Fleet Headquarters decided to evacuate the wounded, some crew members and all the secret documents on board. But the mechanics and the crew managed to regain control of the ship: towed to the nearest port, it was partially repaired and then it returned to the United States on 10 August.

As World War II came to an end, the US Navy did not undertake the work necessary to recover the Shubrick. On November 16, 1945, it was sold off on November 28, 1945 and was sold on November 28 for being scrapped.