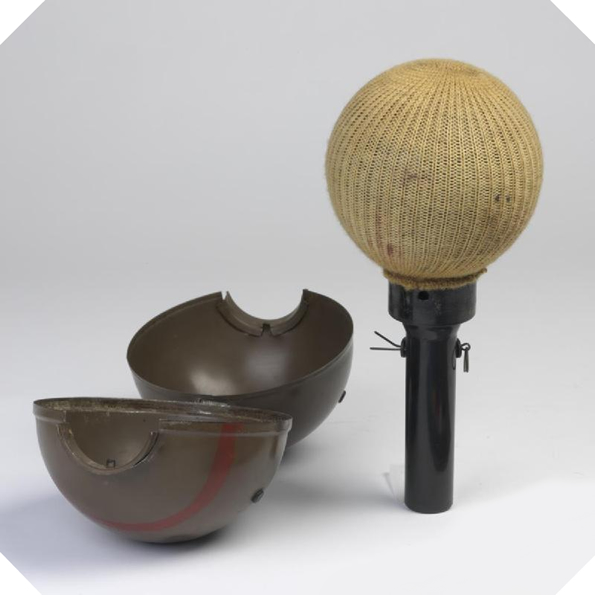 It was in 1938 that the idea of ​​a sticky anti-tank grenade was developed by Major Millis Jefferis, one of the leaders of the English Home Guard, which draws on the work of two scientists from the University of Cambridge, Drs. Bauer and Schulman.

The need to acquire such a weapon becomes a priority following the evacuation of Dunkirk by Franco-British troops. Indeed, many materials were abandoned on the continent from May to June 1940 (including anti-tank weapons) and the threat of a German landing in England was becoming more and more pressing. It is Winston Churchill, the British Prime Minister, who decides to launch the development of these special grenades in order to equip, possibly, the British population in case of German invasion.

Jefferis entrusts the design of this grenade to the engineer Robert Stuart Macrae: he develops a glass sphere containing 570 grams of nitroglycerin and covered with a powerful adhesive, all connected to a handle that facilitates launching. The adhesive part is protected by a spherical cover to be removed before use.

2.5 million grenades are produced from 1941 to 1943. Fragile, they are difficult to use and a simple layer of mud can prevent the grenade from remaining stuck. Nevertheless, they were used throughout the Second World War and especially during the Battle of Normandy. The French resistance and the Commonwealth armies are equipped with this number 74 grenade nicknamed “Sticky bomb”, meaning literally “sticky bomb”.

In December 1943, the Germans developed a countermeasure for their tanks by installing a special coating called “Zimmerit” to prevent the magnetic grenades from attaching themselves to the armor.