The spread of the Covid-19 virus has led to a necessary adaptation of memory tourism in Normandy. 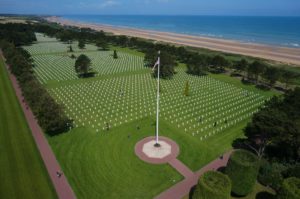 Since the start of 2020, Normandy has not escaped the spread of the Coronavirus. In France, several thousand people have been affected and new health safeguard measures have been decided by the President of the Republic. Thus, due to confinement, visits to historic sites are temporarily prohibited in order to limit the spread of the virus. These measures also affect museums and memorial sites dedicated to the Landing and the Battle of Normandy.

On March 13, 2020, the day after the television intervention by the President of the French Republic, Emmanuel Macron, several museums announced their temporary closure. These decisions, sad but essential in order to limit the rapid spread of the Covid-19, come at a time when the figures at the start of the year were excellent for memory tourism in Normandy. Museums had been hit several times by the latest social movements (Yellow Vests, transport strikes) and are now faced with a new challenge which weighs heavily on the economy.

Several museums dedicated to the history of Operation Overlord in Normandy have closed due to insufficient financial results in recent years, such as the Ranger Museum in Grandcamp-Maisy, the Normandy Tank Museum in Catz and the Museum of the Liberation of Quinéville which had launched an appeal for help recently. These memory spaces play an essential role in transmitting the memory of the battles of 1944 and the sacrifice of several thousand Allied soldiers, many of whom are buried in Normandy.

Many reservations for this period have already been canceled by tourists from around the world. Several ceremonies, like the commemorations in Carentan, the traditional parachuting of La Fière or the 2020 edition of the international film festival of the Second World War in Normandy, are already canceled. The participation of allied and partner military forces in these commemorative ceremonies is also called into question, given the need to preserve security forces around the world. The consequences for memory tourism are clearly felt.

On April 13, 2020, the French state decided not to allow public gatherings and the organization of festivals until mid-July 2020 due to the Covid-19 health crisis. As a result, all commemorative events have been removed from the D-Day Overlord site. For the first year since 2001, I will not have the pleasure of presenting the calendar of commemorations to you on my site.

I have a special thought for the veterans, some of whom unfortunately left us after having contracted the Coronavirus. We will not forget them, even if the commemorations will not take place as usual. Some ceremonies will take place in select committees and several initiatives have already emerged. Thus, the bell towers are invited by museums and associations, as well as local elected officials, to ring their bells on June 6, 2020 at 06:44 p.m. in tribute to the liberators.

#DDayOverlordLive project. I will now meet you all day on June 6, 2020 for a virtual tribute on the D-Day Overlord social networks. By filming the restricted ceremonies or your own individual tribute in Normandy (in accordance with the rules of distancing), you can broadcast them online or offline with the hashtag #DDayOverlordLive. These videos will then be shared on the D-Day Overlord Facebook page in order to make them accessible to as many people as possible.

I appeal to people who will be in #Normandy from June 5 to 7, 2020. Museums, associations, enthusiasts: film the ceremonies with limited participation in connection with the #DDay76 commemorations and publish the videos with the hashtag #DDayOverlordLive. They will be shared here