Death of Bernard Dargols, French hero of the Battle of Normandy 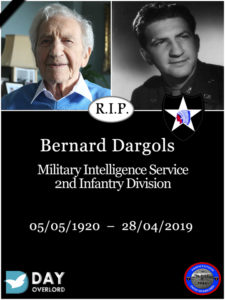 Bernard Dargols had participated in the Battle of Normandy in the US uniform of the 2nd Infantry Division.
Photo : D-Day Overlord

Born in Paris on May 5, 1920, Bernard Dargols died just days before his 99th birthday. He leaves us the testimony of an extraordinary adventure during the Second World War and a clear message for future generations: we must be careful not to let barbarity return among us.

In 1938, while he was in the United States to make his first professional weapons, Bernard Dargols learned that the war broke out in Europe. A few weeks later, as he watches the military news in a cinema, he discovers the handshake between Hitler and Petain: it is the shock that triggers everything. Unable to accept such an armistice and even less collaboration with the Nazis, he volunteered at an American recruiting center to bear arms and defend his country, even on the other side of the Atlantic.

The Americans allow him to engage: he performs his basic training at Fort-Dix in New Jersey and Croft in South Carolina. He is then formed to intelligence actions, like the “Ritchie Boys”, these Europeans supporting US services for the liberation of their country: his goal is to inform the American forces in the days following the initial assault of the landing in Normandy, infiltrating behind the enemy lines and interrogating the civilians on the positions of the German units. He landed at Omaha Beach on June 8th 1944 after the terrible fight of D-Day and participated in the Battle of Normandy, crossing French towns such as Formigny, Trévières, Saint-Georges-d’Elle and Cerisy-la-Forêt. 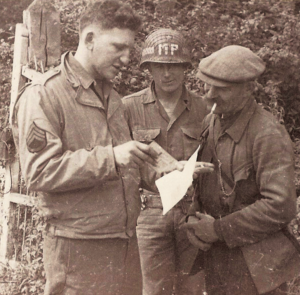 Participating in the liberation of Brittany, he then went to Paris, with the authorization of his superiors, to find his family there. With his unit, he participated in the liberation of Belgium and went as far as treading the German soil. The Americans then decide to keep him in Paris where he questions the French who want to work for the liberation forces, in order to detect any former collaborators.

After the war, Bernard Dargols participated many times in the commemorations of the landing and the battle of Normandy, where he obtained multiple distinctions. Possessing dual French and American citizenship, he notably received the honors of President Barrack Obama in 2014 in Colleville-sur-Mer, on the occasion of the 70th anniversary of D-Day. With his granddaughter, Caroline Jolivet, he wrote his memoirs in the book: Bernard Dargols, a French G.I. at Omaha Beach. 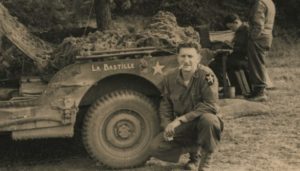 He leaves the memory of his incredible testimony, often repeated. Honorary president of the association D-Day Overlord, he was appreciated by all and his permanent humor could not hide the serious message that he wanted to share until the end of his life: barbarism has not disappeared and may resurface again today. It is up to us to remember the Nazi horrors so as not to let the world burn again.