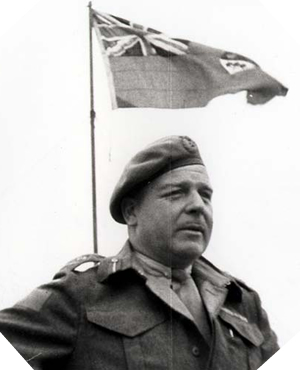 Rodney Keller was born on October 2, 1900 in Tetbury, Gloucestershire, England. His family emigrates to Canada and “Rod” studies there. He joined the Royal Military College of Canada in Kingston and the Princess Patricia’s Canadian Light Infantry Regiment. His career took him to England, as did other senior Canadian officers who attended courses at joint defense colleges such as the Camberley Staff College.

Shortly after the outbreak of the Second World War, Rodney Keller commanded the first regiment in which he served, the Princess Patricia’s Canadian Light Infantry, then the 1st Infantry Brigade. On September 8, 1942 he was promoted to major-general and commanded the 3rd Canadian Infantry Division (D.I.).

On June 6, 1944, the 3rd D.I. arrives at Juno Beach and his men suffer heavy losses during the landing. In spite of everything the battle continues and it participates in several operations such as “Windsor” (catch of Carpiquet and its aerodrome) which turns out to be one of the most important successes for the Anglo-Canadians during the battle for Caen.

With a strong temperament, he does not hesitate to take a stand against his superiors for the good of his men, which is worth it to attract criticism from his staff at the same time as the admiration soldiers under his command.

He was relieved of his responsibilities on August 8, 1944, following a friendly fire: during Operation Totalize, US bombers mistakenly targeted Canadian soldiers and Rodney Keller was seriously injured.

This incident permanently removed him from any command even though he remained in the army until 1953, when Rodney Keller retired. He died in 1954 during a private trip to Normandy following a heart attack.

Back to the Canadian military personnel biographies menu