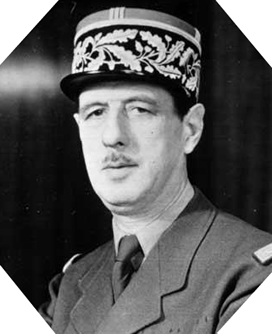 Charles de Gaulle was born November 22, 1890 in Lille. He is the son of Jeanne Maillot and Henri de Gaulle, professor of letters, mathematics and history.

After his studies in preparatory classes at private Catholic college Stanislas in Paris, he joined in the last Military Special School of Saint-Cyr in 1908, ranking 119th out of 221. But it is proven and is awarded the 13th place on leaving school. Among his comrades in the promotion of Fez, the major is none other than the future marshal June. His classification allows him to choose the infantry and he commands a section to the 33rd Infantry Regiment (IR) located in Arras and commanded by Colonel Petain.

The First World War broke out less than a year after his appointment as a lieutenant and Charles de Gaulle was wounded several times (kneeling in Dinant in August 1914, left hand during the Battle of the Somme in March 1915) . Very quickly and despite his strong character that does not please everyone, he takes the lead and becomes the deputy of Petain at the head of the 33rd RI A wounded again, he is taken prisoner in the wake of the furious fighting Douaumont in March 1916. He tries to escape once before being confined to the fort of Ingolstadt in Bavaria where he renews his attempts to escape five times, without success. He was released only after the armistice, with the feeling of disappointment at not having been more useful to his country during his two years in prison.

After the war, he found the way to the military schools by providing courses in history at the military academy of Saint-Cyr and then admitted to the Ecole Supérieure de Guerre in 1922. He published his first works of military theories: “The Discord at the enemy” (La Discorde chez l’ennemi) in 1924, “The Thread of the sword” (Le Fil de l’épée) in 1932, “Towards the professional army” (Vers l’armée de métier) in 1934 and “France and his army” (La France et son armée) in 1938. His works distinguish him at a time when the French army made the choice of static defense with the Maginot line: he advocates the creation of a professional army and the establishment of mobile armored squadrons (an idea of ​​General Estienne he supports) that deal with the Maginot strategy. The prevailing political and military conservatism of the time earned him regular criticism, but he made a name for himself in French politics.

The Second World War is a new turning point for Charles de Gaulle: he took the lead of the 4th battalion division (comprising 364 battle tanks) on May 11, 1940, the day after the German offensive in the west. Colonel de Gaulle (he was appointed to this post on December 25, 1937) launched a series of bold attacks to Montcornet. Despite excellent results, his counter-offensive is not supported and he is forced to withdraw in the face of the importance of the adverse means. He renewed his offensive (after being temporarily appointed to the rank of Brigadier General on May 25, 1940) and made 400 prisoners in the Somme at Abbeville. Again, he is forced to withdraw.

While in London to ask the British Prime Minister Winston Churchill to send more troops to France, he learns the armistice signed by Marshal Pétain. On June 18, 1940, he launched his most famous call on the airwaves of the B.B.C. and sets up Free France and begins to organize resistance in France.

Despite the reluctance of US President Roosevelt who sees him as a potential tyrant, he makes the voice of France heard at allied strategic meetings.

De Gaulle wants free French forces to participate in military operations, especially the offensive to open the front of Western Europe. Thus, air, land and sea forces of the Free France participate in preparations for the offensive in Normandy. However, Charles de Gaulle is not aware of the beginning of Operation Overlord in Normandy by Winston Churchill until shortly before its launch.

He landed in France on June 14, 1944 in Courseulles-sur-Mer and set up the provisional government of the French Republic, to prevent the United States from setting up in France their own administration. De Gaulle also put pressure on the Allied staff for the men of the 2nd Armored Division to liberate the French capital: on August 25, 1944, General Leclerc received the surrender of Von Choltitz in Paris.

The end of the Second World War and the proliferation of conferences mark the return of France on the international scene, thanks to the efforts of General de Gaulle, despite the defeat of 1940.

In 1947, he founded the party of the Rally of the French People (RPF) which won a great success especially with the veterans and the resistant ones, then it puts in brackets its political activities until 1958. The war of independence in Algeria is the occasion for de Gaulle to find the top of the political poster: it makes adopt the constitution of the Fifth Republic and remains the presidency of the French State until 1969, date on which it resigns.

He retired to his residence in Colombey-les-Deux-Eglises where he died on November 9, 1970. A mass was held at the Notre-Dame church in Paris on the same day of his funeral, attended by presidents and sovereigns of the whole world.