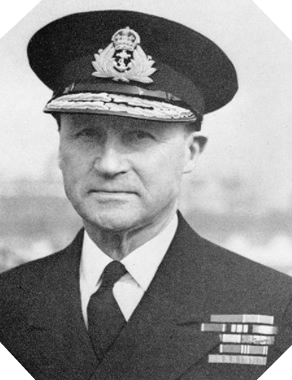 Bertram Home Ramsay was born on January 20, 1883 in London. Coming from a Scottish family, he studied at Colchester Royal Grammar School before joining the Royal Navy in 1898. His first assignment was on the H.M.S. (Her Majesty Ship) Britannia before being transferred to the H.M.S. Crescent.

It was during the First World War that Bertram Ramsay took command for the first time and for two years of a Royal Navy building, the M 25, from August 1915. He conducted a series of patrols on along the Belgian coast (being attached to Dover Patrol, the patrol of Dover) until October 1917, when he took command of a destroyer, the HMS Broke, who also belongs to the Dover Patrol. On May 9, 1918, he participated in the second Ostend raid aboard this ship.

In 1938, when he was fifty-five years old and considering retiring, Ramsay remained in the navy in the face of growing tension in relations with Germany. Winston Churchill supports this decision, which he also wanted. When World War II broke out, he was appointed Vice-Admiral and took responsibility for operations in the Dover area as of August 24, 1939. Prohibiting all passage of German submarines in the Channel, it is in this framework that he also directs the evacuation of Dunkirk, also known as Operation Dynamo. For nine days, locked in a tunnel under Dover Castle, he led the rescue of 338,226 Allied soldiers leaving France. The “debacle” is thus a real success, thanks to the work of the vice-admiral and his team.

After Operation Dynamo, Bertram Ramsay is in charge of organizing the defense of the south coast of England in the face of imminent German invasion. But it does not come and the Allies take the initiative: Ramsay leaves the dress of the defender for that of the assailant by being appointed to the naval commander allied expeditionary forces. He organized the amphibious maneuvers in North Africa as part of Operation Torch in November 1942, then those in Sicily in July 1943 (Operation Husky), of which he personally directed the Eastern Task Force.

This experience of landings led him logically to be appointed commander-in-chief of the naval forces of Operation Overlord. Subordinate to General Eisenhower, he is preparing the maritime part of Operation Neptune which focuses on the transport of allied units across the Channel.

Operation Neptune is a near total success and losses are well below estimates. The experience of different amphibious operations in the Mediterranean has paid off. D-Day, without delay, Bertram Ramsay installs his command post in a house in Ver-sur-Mer, a locality in the British sector of Gold Beach where he directs the continuation of maritime operations.

On January 2, 1945, while traveling to Brussels to attend a meeting led by General Montgomery, his plane (a Hudson V of the Royal Navy’s 781 Squadron) crashed on take-off at Toussus-le-Noble (France). Bertram Ramsay is killed instantly, he is buried in the new cemetery of Saint-Germain-en-Laye (France). 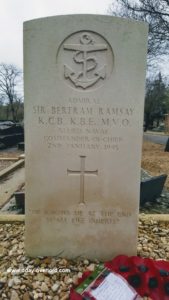 The grave of Admiral Bertram Ramsay in the new cemetery of Saint-Germain-en-Laye.
Photo (2020) : Marc Laurenceau