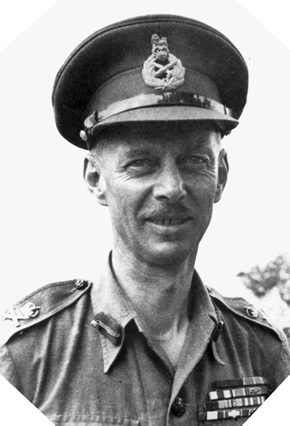 Miles Christopher Dempsey was born on December 15, 1896 in New Brighton, Cheshire. He joined the Sandhurst Royal Military College from which he graduated in 1915 before joining the Royal Berkshire Regiment. With his unit, he served immediately after school leaving France during the First World War. He receives the Military Cross, one of the most prestigious British decorations, for acts of bravery.

After the war, Miles Dempsey remained in the army and continued to pursue in parallel his great passion: the cricket. At the outbreak of the Second World War, he was lieutenant colonel commanding the 13th Infantry Brigade of the British Expeditionary Force in France and participated in the mission of coverage of the evacuation of the Dunkirk pocket. This action earned him a Distinguished Service Order.

In 1942, he was promoted to the rank of general and then commanded the 13th Corps of the 8th British Army fighting in North Africa (Libya and Tunisia). Subsequently, he participated in the development of invasion plans for Sicily and field operations in 1943. Miles Dempsey then fight in Italy.

His experiences in the field of joint actions and amphibious operations are noted by the post general Montgomery who is calling upon him to prepare for Operation Overlord. in Normandy. “Monty”, whom he knows well for serving under his command in North Africa and Sicily, the place in the head in January 1944 of the 2nd British Army, including forces also Canadian, Polish, Dutch or Belgian.

Miles Dempsey commanded the 2nd Army for the duration of the Battle of Normandy and until the end of the Second World War. After the successful landing on the beaches of Gold, Juno and Sword, he was defeated in the Caen region for more than two months before his men managed to jostle the German lines and then began a particularly rapid progression from the end of August 1944 towards Belgium: they liberated Brussels and Antwerp in September 1944. On October 15, 1944, Dempsey was knighted by King George VI himself.

Sir Miles Dempsey, the first senior officer of the British Army to cross the Rhine on March 23, 1945, became a celebrity in England and made the front page of the Illustrated London News on April 7, 1945.

On May 3, 1945, he welcomed German senior officers led by Admiral von Friedeberg to his headquarters who wished to surrender. After the end of the war in Europe, Dempsey took command of the 14th Army in Malaysia before being appointed as chief of ground forces in Southeast Asia who are still fighting.

In 1946, he was appointed commander-in-chief of the British land forces in the Middle East. The following year, he leaves the army.

He died on June 5, 1969 at the age of 72 in Yattendon, Berkshire, on the eve of the twenty-fifth anniversary of the Normandy landings.