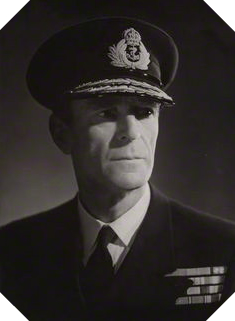 Philip Louis Vian was born on June 15, 1894 in London. This descendant of a French Huguenot family joined the Royal Navy as an officer cadet in May 1907 and studied at the Dartmouth and Osborne Universities. In 1912, when he left school, he embarked on the H.M.S. Lord Nelson who remains in protection of the English coasts after the outbreak of the Great War. He was then transferred aboard the H.M.S. Argonaut but here he does not meet the action he seeks. Vian is then transferred several times to get closer to the combat zones.

After the war, he remained in the Navy and specialized in the field of armament. He served on an Australian warship from 1920 to 1922 and many other ships that lead to the Mediterranean Sea or the China Sea. His skills in the field of armament led him to be appointed to the admiralty in London to share his knowledge. He then took his first command in March 1933, that of the destroyer H.M.S. Active, then he was appointed at the head of the 3rd squadron of destroyers (he took in particular in 1935 the command of H.M.S. Arethusa who participated in Operation Neptune in June 1944). In 1936 he commanded the 1st Destroyer Squadron and participated in the evacuation of British nationals from Vigo following the outbreak of the Spanish Civil War.

Promoted to the head of the 11th Destroyer Squadron after the start of the Second World War, he had to escort convoys across the Atlantic and fight against German submarines. In 1940, he was appointed commander of the 4th Destroyer Squadron composed of modern battleships class Tribal dating from 1936. Philip Vian receives in February the mission to release nearly 300 sailors of the British merchant marine imprisoned aboard the building Altmark German refueling station. He locates then manages to release the prisoners, which is however done in Norwegian territorial waters: Norway cries to the violation of its space but Vian is decorated on his return from the Distinguished Service Order.

Following the invasion of Norway by Germany, Vian participates in the protection of the landing operations of the Franco-British forces (Operation Mauritius). On board the H.M.S. Afridi, he welcomes the survivors of the French destroyer Bison before being attacked and sunk in turn. Philip Vian and his sailors are then evacuated aboard H.M.S. Imperial and H.M.S. Grenade. On May 27, 1941, he participated in the destruction of the German cruiser Bismarck 650 kilometers west of Brest and an Anglo-Canadian raid in Spitsbergen in Norway.

In October 1941, Vian participated in the defense of the island of Malta at the head of the 15th Cruiser Squadron. It was in this context that he took part in the first battle of Sirte in December 1941. In March 1942, his ship (HMS Naiad) was sunk by a torpedo fired by the submarine U565, forcing him to change ship Admiral.

He then delivered the second battle of Sirte against the Italian navy he won, which earned him a letter of congratulation sent by Winston Churchill and be made Knight of the British Empire.

His health has been falling since the summer of 1942, but since the spring of 1943 he has been in great shape again. He participated in the Husky operation in Sicily at the head of the Force V, which consists of aircraft carriers to ensure support for the troops landed.

Beginning in November 1943, as part of the preparations for Operation Overlord, Philip Vian was placed at the head of Force J, the amphibious force intended to transport troops and Canadian equipment to Juno Beach. But in January 1944, he was placed at the top level taking command of the Eastern Task Force which brings together all the ships intended for the beaches of Gold, Juno and Sword.

The success of the Normandy landing led him to take on board the British aeronautical means deployed in the Pacific against the Japanese. He is in charge of a series of operations aimed mainly at the port and oil installations in Sumatra. The planes of the British fleet participate in the support of American troops landed in Okinawa and then attacks directly on Japanese soil.

In 1948 Philip Vian was promoted to admiral. Before retiring in 1952, he became commander-in-chief of the territorial naval force and was promoted to the honorary rank of admiral of the fleet.

He became director of Midland Bank then an insurance agency, not to mention write his memoirs that are published in 1960 under the title: “Action this day”. Vian died on May 27, 1968 in Ashford Hill, he is buried in the crypt of St. Paul’s Cathedral in London.