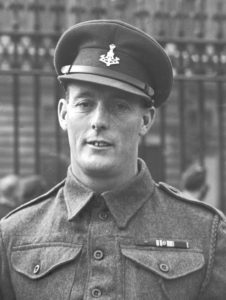 Stanley Hollis was born September 21, 1912 in Middlesbrough, England. At 17, he began training to become a navigation officer and made several trips at sea over two years with the Rowland & Marwood Steamship Company, before accepting employment as a lorry driver in the Middlesbrough area. In 1933, he married Alice Clixby who gave him two children, a boy and a girl. 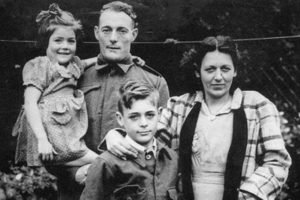 Before the declaration of war against Germany, Stanley Hollis enlisted in the territorial army in the 4th Battalion Green Howards. During the general mobilization, he was transferred to the 6th Battalion Green Howards and was deployed to France in 1940 within the British expeditionary force. He participated in the evacuation of Dunkirk before joining North Africa with the 8th army, fighting in El Alamein. He was wounded in the head in April 1943 during the battle of Wadi Akarit in Tunisia. 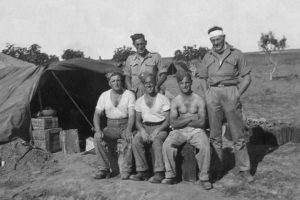 Stanley E. Hollis (with bandage on his head) in Tunisia during the battle of Wadi Akarit in 1943. Photo: DR.

In 1943, he was promoted to Company Sergeant Major (CSM) and then participated in Operation Husky, the assault in the Mediterranean against occupied Sicily, which began on July 9. Wounded a few days later during the battle of the Primosole bridge, he must be evacuated.

Returning to England in the spring of 1944, his regiment prepared for the assault on Fortress Europe. Stanley Hollis is famous for his rigor and his discipline in any test. Particularly feared during reviews and tolerating no deviation, he is both feared and admired by his men. 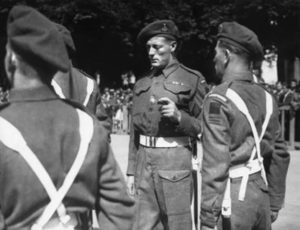 Stanley Hollis inspects his men during a military parade in England. Photo: DR

On June 6, D-Day, his regiment was about to land on the King sector of Gold Beach, west of La Rivière. At 31, he commanded the support platoon of  D Company, composed of three heavy machine guns and three mortars, and appeared as a veteran alongside the young English soldiers of his unit. When his company officer, Major Ronnie Lofthouse, ordered the distribution of condoms aboard the transport ship SS Empire Lance, which were to be used to protect the weapons from seawater and sand during the assault of the beach, Stanley exclaims with friendly mockery: “Sir, are we going to fight them or fuck them?“. Everyone laughs. His presence reassures.

When the landing craft approach the beach, he distinguishes through the mist created by the smoke shells what he believes to be an enemy combat post. He obtained a Lewis machine gun from his men and fired the entire magazine, leaning on the hull of the boat. By returning the weapon to its owner, he burns the palm of the hand with the still hot barrel of the machine gun. The enemy bunker was in fact a rail shelter on the coastal railway line.

After landing at Hable-de-Heurtot under a few mortar shells, D Company is going inland. It is heading towards the German defensive position of Mont-Fleury (Stp 35a) north of Ver-sur-Mer, but it must first cross a minefield. CSM Hollis had its mortars fired several smoke shells in order to mask the progression of infantrymen in the open. Several machine guns from the Stp 35a strongpoint are active, and inflict casualties. With his Sten submachine gun and grenades, Stanley Hollis crosses the open field which separates them from the first German casemates: he heads towards the position from which comes most of the enemy shots. Reaching a first pillbox, he sends a grenade through the opening and empties two magazines from his Sten, killing two enemy soldiers and wounding others. Taking several prisoners, he then follows a trench leading to a second casemate, built in the garden of a house. He enters the bunker alone and captures its occupants. A total of 26 soldiers surrendered: the Mont-Fleury battery is now under control. The gunners turn were Ukrainian soldiers, , enlisted in the German army and serving in the Ost-Battalion 441, whose regimental command post is installed in Ver-sur-Mer. Several enemy soldiers manage to retreat to the south, but Stanley spots them and opens fire, killing one of them. It was at this point that he was hit in the cheek by the shrapnel of an enemy bullet, probably fired by a sniper. 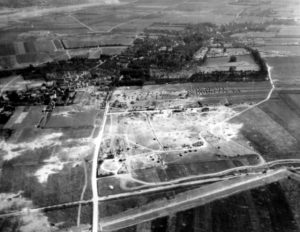 Aerial view of the battery and the village of Mont-Fleury. Photo: DR

After passing Ver-sur-Mer, D company approaches the village of Crépon and engages the German soldiers there. The latter are reinforced by several machine guns and a field gun which block the Allied progression. Stanley Hollis assumed command of the 16th platoon, the leader of which had been killed a few minutes earlier. He decides to silence the enemy artillery gun: he orders some of his men to fire towards the hedge, but the response is particularly violent. Several of his subordinates are killed. Hollis then takes a PIAT rocket launcher and orders two of his men, each armed with a Bren machine gun, to follow him. Crawling in a rhubarb field, they silently approach their target and reach the ruins of a house in which they take position. Within a hundred yards of his target, Hollis adjusts the field gun, shoots… but misses. The Germans react very quickly and fire at the three English. Stanley gives the order to withdraw, but his two mates are pinned down by German fire and prove unable to break contact. Hollis is already far away and realizes with fright that he is alone. Rightly fearing for the lives of his men, he seizes a Bren Gun and immediately opens fire to draw attention to him and allow his two soldiers to fall back.

Simultaneously, an English tank from B Squadron, 4th/7th Royal Dragoon Guards, comes to support the companies of the 6th Battalion, Green Howards. The arrival of the tank changes the situation. C Company moves on the left flank, B company on the right flank, A company in the center. CSM Hollis takes part in the assault, throwing grenades like a First World War trooper. With a handful of men, he reaches a new position along a hedge that flanks the German soldiers: opening fire with all the weapons they have. The enemy defense start falling at Crépon.

After the Battle of Normandy, Stanley Hollis was injured once more in September 1944. Hit in the leg, he had to be evacuated to England. On October 10, barely recovered from his injury, he was received at Buckingham Palace by King George VI to be awarded the Victoria Cross, the most prestigious military medal of the British army for his multiple actions during D-Day in Mont-Fleury and Crépon. CSM Hollis was the sole recipient of the Victoria Cross for all the combat actions carried out in Normandy on June 6, 1944. 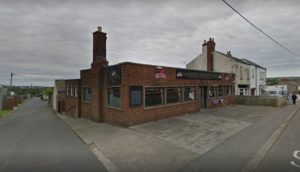 The Hollywell View pub at Loftus in 2016, now closed, which was owned by Stanley Hollis from 1970 to 1972. Photo: Google Street View

Back to civil life in 1945, Stanley worked for a few years in a steelworks. He was then hired in a Darlington garage and then as a shipbuilding engineer before becoming the owner of his own pub in North Ormesby, Middlesbrough, naturally called “The Green Howard”. In 1970, he bought the “Hollywell View” pub at Loftus. Stan died two years later, February 8, 1972. He is now buried in Aclkam Cemetery, Middlesbrough. His wife Alice has been buried with him from March 23, 1990. 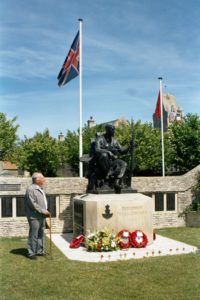 In 1996, a memorial dedicated to the 6th and 7th Battalions, Green Howards Regiment, was inaugurated by the King of Norway in Crépon, Normandy: the statue of a soldier sitting on ruins, which seems to catch its breath after hard fighting, represents Stanley Hollis. On November 26, 2016, his hometown inaugurated a statue and commemorative plaques in his memory, in the presence of his son Brian. Since 2016, a school in Middlesbrough has also been named after him. 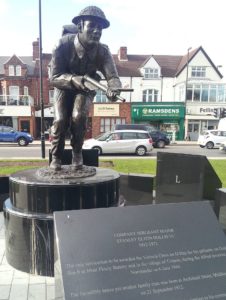