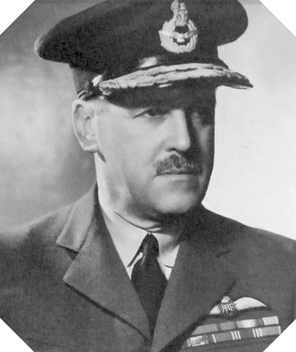 Trafford Leigh-Mallory was born on July 11, 1892 in Mobberley, England. He studied law at Magdalene College (where he met Arthur Tedder, future commander of Operation Overlord) and wanted to become a lawyer when the First World War broke out in 1914.

He joined the Liverpool regiment as an ordinary soldier before becoming an officer, which prevented him from going to the front with his unit. He married in 1915 with Doris Sawyer before going to war in the South Lancashire Regiment: wounded in the Second Battle of Ypres, he asked for his transfer in January 1916 in the Royal Flying Corps, the ancestor of the Royal Air Force (RAF). Six months later, Trafford Leigh-Mallory served at No. 7 Squadron with which he flew reconnaissance flights during the Battle of the Somme. In November 1917, while serving with No. 8 Squadron, he guided artillery and tank fire during the Battle of Cambrai, an action for which he was awarded the prestigious Distinguished Service Order Medal.

After 1918 and the armistice, Leigh-Mallory hopes to make a career in the field of law but without success. He returns to the Royal Air Force and serves as an instructor, specializing in the field of joint services. With the development of new weapons, including the tank, the need for coordination is becoming more urgent and the armies need leaders to develop them. Appointed to the Air Ministry in 1932, he took part in the League of Nations Disarmament Convention taking place in Geneva. In December 1937 he took command of No. 12 Group, Fighter Command.

In November 1938, Trafford Leigh-Mallory became the youngest officer in the Royal Air Force to become Air Vice-Marshal, only forty-six years old. He then participated in the Battle of Britain during which he came into conflict not only with the Germans but also with English officers commanding other air formations: he asked that two of them (Hugh Dowding and Keith Park) are relieved of their command by reason of their decisions during and succeeds, which is worth to him to be accused of plotting against his comrades. He then orders the No. 11 Group, Fighter Command.

His unit is engaged in bombing operations on German territory and his tactics are criticized by many Allied officers because under his command, nearly 500 Royal Air Force pilots died in 1941, four years later. British pilots killed for a dead German pilot. In addition, the results in terms of destruction in the opponent are minimal compared to the means committed. However, the Germans are engaged in Operation Barbarossa in the east and most of the Luftwaffe aircraft are deployed there. To this rude failure is added that of the Dieppe raid in the context of Operation Jubilee: British pilots are outclassed by German pilots.

These sad events serve as a lesson for Trafford Leigh-Mallory who then fights for the Allies to unite and establish a unified air force command. In 1943, he was made Knight and in August of the same year, he was appointed head of the Allied Air Expeditionary Forces as part of the preparation for Operation Overlord. What interests General Eisenhower, commander-in-chief of Overlord and who has chosen him for this position, is Leigh-Mallory’s expertise in the field of joint operations: cooperation and coordination between ground troops and Air forces are one of the keys to success.

Leigh-Mallory plans the aerial part of Operation Overlord despite regular intervention by Air Marshal Arthur Tedder, Eisenhower’s deputy. Its primary objective is to fix the German reinforcements before they reach the bridgehead that the Allies set up in Normandy. In order to carry out its mission, it wants to bomb the road knots, marshalling yards and railway lines, as well as many localities in France: Leigh-Mallory accepts the risk that many French civilians are killed under the bombs because it is according to him a sacrifice for the success of the allied armies. It is also responsible for fighting V-1 rocket launch sites as part of Operation Crossbow.

In August 1944, the Battle of Normandy was already well engaged and largely under Allied rule, he was appointed head of the air force deployed in Southeast Asia. He then flew with his wife aboard an Avro York November 14, 1944 but following very bad weather the plane crashed in the French Alps. The couple is killed instantly along with ten other people on board. His rival of the Battle of Britain, the Air Marshal Keith Park, is named in his place. He is buried near the place of the accident, in the village of Le Rivier d’Allemont, in Isère (France).