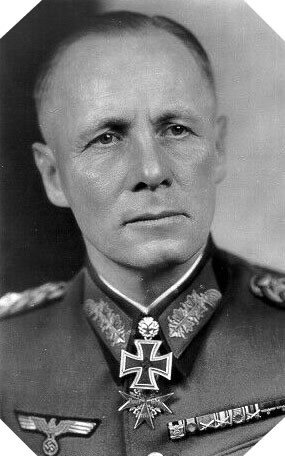 Erwin Rommel was born in Heidenheim on November 15, 1891.

In 1910, he enlisted as a cadet to the 6th Battalion, 124th Infantry Regiment, at Weingarten, and in 1912 he received his lieutenant’s certificate.

This young officer knows the war very early because in 1914, at the beginning of the First World War, he was only 23 years old. He turns out to be an excellent soldier very quickly, who stands up to the opposing military forces and pushes his men to walk long distances in the Alps in order to surprise and beat French troops stationed.

Decorated with the Order of Merit, he became a professor at the Potsdam War School after the war, then was appointed director of the Wiener-Neustadt War School and took the opportunity to publish a manual for German soldiers: “Die Infantry Greift An” (“The Infantry Attacks”).

Hitler appointed him in 1938 as chief of staff at his headquarters. A year later, the Führer, satisfied with Rommel’s work, put him at the head of his personal guard.

Between May and June 1940, Rommel began his second world war, and as commander of the 7th Armored Division during the invasion of France. At the head of the German armed forces, this division progresses very rapidly towards Lille and then takes the Maginot Line backwards, which it partly captures.

After the Campaign of France, Erwin Rommel is appointed commander of the German military forces Afrika Korps in North Africa where he develops his military spirit and imagines a large number of strategies and defenses that will be reused by some German general officers throughout the Second World War. On the field of operation, in the Allied and German headquarters, its reputation is great and the military world now knows it as the “Desert Fox”.

After defeating the Allies in Libya, he won two more battles in North Africa where he inflicted serious defeats on American soldiers who had just arrived on the front and reached El-Alamein in June 1942, a year that sees Erwin Rommel move to Marshal’s rank.

And Marshal Rommel sees far away: he wants to attack the Soviet troops via the Caucasus, once North Africa under control and secure. But the sequence of events prevents it from carrying out these operations, the Italians needing help and the supplies of German troops, chased and destroyed by the Allied air force, not allowing to drive the forces out of force. ‘Africa.

But the British general Montgomery attacks in North Africa and conquers the city of El-Alamein. The only chance for Rommel is to regroup the German forces on a front line called Mareth, but the operation is delicate because it lacks men and equipment. Yet, against all odds, he manages to regroup his soldiers who defend Mareth.

In 1944, after having withdrawn him Afrika Korps, he receives the command of the army group B located in Normandy, in front of England. His delicate task is to defend the beaches of an Allied invasion. It develops defense techniques identical to those used in North Africa, floods innumerable fields at the rear of the coasts to prevent any drop or landing of gliders, and makes frequent visits to men stationed nearby. beaches, to verify that work is progressing.

Rommel is aware that the first hours of the Allied assault will be very important, and he writes to his wife a few weeks before the Normandy landings on June 6, 1944: “The 24 hours before the invasion will be paramount. we, as for the Allies, will be the longest day.“

And June 6, 1944, day of the invasion, Rommel is not in Normandy, but he celebrates in Germany the birthday of his wife. During the day, he returns to his command post at La Roche-Guyon and tries to repel the forces landed at sea, but he knows it is already too late.

On July 17, 1944, while returning from an inspection of the German front, fighter planes piloted by Allied airmen shot his vehicle at Vimoutiers. The driver of the car is fatally injured and Rommel narrowly escapes death.

On July 20, 1944 took place the attack against Hitler. Rommel, who had encouraged all attempts to suppress the Führer, was sacked from his post and his military career ended at that time. Hitler, convinced that Rommel participated in the attack of July 20, gives him the following two possibilities: either Rommel commits suicide and his death is passed for a death as a result of injuries.
or he appears before the People’s Court before which he will be judged and executed as a traitor.

On October 14, 1944, he was taken to Ulm hospital in Germany, where he died after swallowing poison. Four days later, on October 18, Germany celebrated a grand funeral in honor of a military leader very much appreciated by the Germanic people.

Erwin Rommel is one of the only military leaders in Germany who has not been involved in war crimes cases. It is one of the legendary military figures of the Second World War.