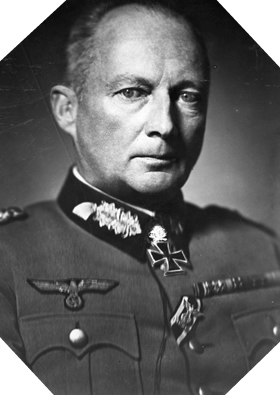 Hans Günther von Kluge was born on October 30, 1882 in Poznan and belongs to a Prussian family of military tradition.

Officer in the artillery, it is attached to the staffs during the First World War. In 1916, he took part in the Battle of Verdun before becoming Brigadier General (Generalmajor) in 1933 and Lieutenant General in 1936. In 1937 he took command of the Sixth Army Group .

Von Kluge immediately presents himself as an officer who does not practice the language of wood, sometimes on the verge of the impulsive. He is openly opposed to his government’s foreign policy on Czechoslovakia, which is why he lost his job. But the period of march to war allows him to be recalled at the head of the 6th Army Group with which he takes part in the invasion of Poland and participates in the fighting of Danzig and the Vistula. He receives the rank of general of artillery (General der Artillerie).

He again expresses his disagreement with the initial plans of invasion of France. Despite everything, he participated in the breakthrough of the Ardennes and the campaign of France in 1940. Promoted Generalfeldmarschal July 19, 1940, he then took part in the operation Barbarossa in the Soviet Union at the head of the 4th German army that takes Smolensk in July 1941. He has a heated relationship with General Guderian, whose tactical sense and lack of discipline he criticizes, as well as with General Erich Hoepner, who would be too slow in his opinion. Very influential with Hitler, these two generals are relieved of their command. Very quickly, he is nicknamed “Kluge Hans” by his men: “Clever Hans”.

At the end of 1941 he took the lead of the Army Group Center instead of Fedor von Bock and took part in the Battle of Kursk. Seriously wounded on October 27, 1943 in a car accident between Orscha and Minsk, he did not find the operational until July 1944 during the Battle of Normandy. Replacing Marshal von Rundstedt who had begun negotiations with the Allies, he took the lead in Army Group D. A few weeks later, he also took command of Army Group B, formerly led by Marshal Rommel, who was wounded. during an air attack on the Norman front.

The situation in Normandy is particularly sensitive for the German forces, which are bending under the weight of the incessant Allied attacks. Its headquarters is itself the target of Anglo-American aviation. The resistance in Normandy seems more and more difficult and serious questions arise about Hitler. He received several visits from opponents of the Fuehrer, in particular those of Col. Cäsar von Hofacker, cousin of Stauffenberg (who was behind the attack of 20 July 1944), Henning von Tresckow, Ludwig Beck, Carl Friedrich Goerdeler or Friedrich Olbricht.

These exchanges push the Gestapo to conduct a series of investigations requested by Guderian and Hitler, but which do not succeed.

In this sensitive situation, we must add the American breakthrough in the grove following the operation Cobra. Patton’s troops are now deployed in Britain and the Germans are unable to stop them. Hitler ordered the launch of an immediate counterattack from Mortain to Avranches to cut American forces in half.

Von Kluge took the initiative to advance the date of the operation which had been decided by the Führer. Stunned by the destructive attacks of Allied aviation, the counter-attack is a bitter failure. Conscious of the impossibility of resolving the situation in Normandy itself, he suggested that Hitler evacuate the German forces from France and regroup them behind the Siegfried line.

following Mortain, the recent mail, and an unjustified absence of several hours on August 15, 1944, Hitler relieved von Kluge of his command and replaced him with Marshal Walther Model.

Concluded in Berlin to explain himself to the Führer, von Kluge commits suicide in the car that takes him to Metz on August 18, 1944.

Hitler receives a letter written by von Kluge before his suicide in which he asks him to “make peace and put an end to a hopeless fight as soon as possible“. Doubting von Kluge’s real intentions during the Battle of Normandy and suspecting possible secret negotiations with the Allies, Hitler refused to receive military honors at his funeral.