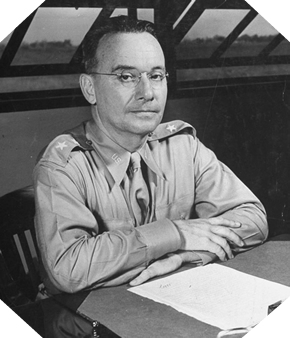 Lewis Hyde Brereton was born on June 21, 1890 in Pittsburgh, Pennsylvania. While preparing for entry to West Point, he decided to join his brother at the Naval Academy Annapolis in 1907. He encountered a series of medical difficulties related to a fragile state of health: considered unfit to serve in the Navy , Brereton engages in the US Army. On August 17, 1911, he was appointed as a Second Lieutenant in Coastal Artillery and served successively in Fort Monroe, Virginia at Fort Washington, Maryland.

In the years that followed, he discovered a passion for aeronautics and took flying lessons with the US Army Light Aviation and quickly improved in the field. After a short return to the coastal artillery from 1913 to 1916, which allowed him to serve as a lieutenant in the Philippines, he was appointed to the 2nd Aero Squadron in 1917 before joining the air section of the Staff in Washington.

When the United States entered the First World War, Lewis Brereton was promoted to captain and continued training for US Air Force personnel. He then took command of the 12th Squadron (12th Aero Squadron) on March 1, 1918, which was deployed in France. From May of the same year, the pilots carry out a series of operations in the Baccarat sector. In August, he was appointed head of an air reconnaissance unit that works for the benefit of Allied forces as part of preparations for the Saint-Mihiel offensive. Lewis Brereton participates himself in the offensive and is engaged in an aerial combat over Thiaucourt which earned him to be decorated with the Distinguished Service Cross. In October 1918, he was appointed as an assistant to General Mitchell, who commanded all US air units.

Brereton is at the origin of one of the first preparations for airborne operations by proposing a dropping of soldiers of the 1st Infantry Division in the region of Metz, occupied by the German forces. This initiative, however, is rejected by General John Pershing. Named Chief of Staff of the Third Army on November 19, 1918, Lewis Brereton was stationed in Germany until February 1919.

Returning to the United States, he is responsible for training the air force, still under the orders of General Mitchell, before being appointed for more than two years at the American Embassy in Paris as a military attaché.

In August 1922, Brereton took charge of the 10th School Group, a training center for experienced pilots of the US Air Force, and was named to lead the 3rd assault group. It follows a difficult period on a personal level for Lewis Brereton who has to face two accidents in flight and the request for divorce of his wife. Despite his problems, he wanted to continue in the military and, from 1928 to 1931, he was appointed instructor at the school of Fort Sill Oklahoma. Promoted to the rank of Lieutenant Colonel in March 1935, he served in the Panama Canal region before joining Leavenworth Staff College as a Commander of the Air Cell for four years. light of the Army.

While the war broke out in Europe, he was appointed Brigadier-General on 1 October 1940 and took command of the 17th Bomb Wing before being appointed, less than a year later, to head 3rd Air Force. Although formally neutral in the beginning of the world conflict, Brereton takes it upon himself to remilitarize his unit and prepare it for a major war, especially in the Pacific region: he disperse the squadrons present on the spot and also builds aerodromes in Australia. In the aftermath of the Pearl Harbor attack on December 7, 1941, Brereton faced widespread invasion by Japanese forces and organized resistance from Allied air forces in the Pacific.

On March 5, 1942, he took command of the 10th Air Force and set up a series of air attacks, including in April of that year against the Japanese naval vessels in the port of Port Blair. Then he was transferred to Cairo because of the advance of the Germans towards the Suez Canal. This is how Lewis Brereton is appointed in June at the head of the air forces allied to the Middle East. He participated in the battle of El Alamein while carrying out multiple bombing missions against the Axis forces in North Africa and also in order to destroy the oil centers and refineries of Romania, like that of Ploiesti.

In January 1943, Brereton was appointed Commander-in-Chief of the 9th Air Force as part of the preparation for Operation Overlord in Normandy. Based in England (Sunninghill Park in Berkshire) and subordinated to the orders of the Allied Expeditionary Air Force, he set up a series of air raids against German targets located across the Channel. From October 1943 to April 1944, the ranks of the 9th Air Force increased from 2,162 soldiers to 163,316 and the unit includes nearly 5,000 aircraft. During the Battle of Normandy, 200,000 personnel work for the 9th Air Force.

Brereton receives the mission as part of Operation Overlord to slow down the progress of German troops and neutralize their capabilities as much as possible. He participated in Operation Cobra in July 1944 before taking command of the staff of Airborne Combined Forces, which became, in August 1944, the 1st Airborne Allied Army.

In September 1944, Lewis Brereton participated in Operation Market Garden in Holland. He moved shortly after his staff from Sunninghill Park to Maisons-Laffitte in France and worked on the development of Operation Varsity in March 1945.

In May 1945, returning to the United States for the first time since October 1941, he took command of the 3rd Air Force and then the 1st Air Force before joining the cabinet of the Minister of War and leaving the army. 1948 to the rank of Lieutenant General. He had his memoirs published in 1946 through William Morrow under the title: “The Brereton Diairies”

Lewis Brereton died on July 20, 1967 at the age of 77 after a heart attack, shortly after an abdominal operation. He is buried at Arlington National Cemetery.