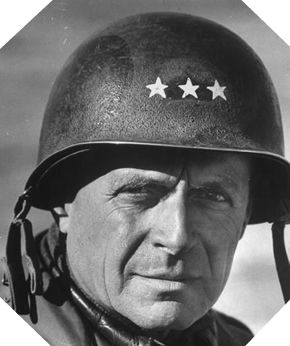 Matthew Bunker Ridgway was born in Fort Monroe, Virginia on March 3, 1895. His father, a graduate of the West Point Military Academy and colonel in the artillery, introduced him to the army and the entire family moved regularly at the mercy of his family. mutations.

Like his father, he presents the West Point contest but fails on his first attempt because of a math test. The following year, in 1913, he was received and graduated in 1917. Hoping to be deployed in the trenches in France, he was transferred the following year as a Spanish teacher at West Point.

In 1925, Matthew Ridgway took command of a company of the 15th regiment stationed at Tientsin in China and was transferred to Nicaragua. Appointed governor general in the Philippines in 1930, he presented in 1935 the contest of the staff school of Fort Leavenworth in Kansas. Finally, in 1937, he was admitted to the Carlisle Barracks War School in Pennsylvania.

When World War II broke out in Europe, Ridgway served as an assistant to the staff of the Fourth Army commanded by General George Marshall. He was in charge of the operations office until January 1942. In August of that same year, he was promoted to Major General and took command of the 82nd Airborne Division with the heavy task of transforming this former classical infantry unit into one. a new airborne unit.

He worked on the planning of the operation in Sicily in July 1943 and took his paratroopers into action. Subsequently, he was engaged in the preparation of Operation Overlord in Normandy, which began June 6, 1944. General Ridgway parachuted D-Day with his division fighting for thirty-three days from Sainte-Mère-Eglise to in Saint-Sauveur-le-Vicomte near Cherbourg.

After the Battle of Normandy, Matthew Ridgway’s skills are demanded as part of Operation Market Garden in Holland. He took command in September 1944 of the 18th Corps. At the end of 1944, his men were engaged against the German counterattack in the Ardennes. In March 1945, he took part in Operation Varsity in Germany, during which he was wounded in the shoulder by the fragments of a German grenade. In June 1945, when the Second World War was over in Europe, Ridgway was appointed lieutenant general.

Fighting continues in the Pacific territories occupied by Japanese troops and General Matthew Ridgway is urged to reinforce the general officers in this part of the globe just before Japan capitulates.

After the Second World War, he took the lead of US military forces in the Mediterranean before being appointed to the United Nations military council as US representative. In 1948, he took command of American units based in the Caribbean and the following year he served in the general staff of the armies led by General J. Lawon Collins.

He marries Mary Princess “Penny” Anthony Long (his third wife) in December 1947 before being appointed to the head of the US 8th Army which was deployed in 1950 in a Korea that sinks into the war. This army is in full retreat when it takes the direction: Matthew Ridgway begins by reorganizing its chain of command and makes replace many officers. He managed to stop the Chinese offensive during the battles of Chipyong-ni and Wonju and, in the spring of 1951, launched a counter-offensive to the north.

Ridgway was appointed commander-in-chief of the United Nations troops in Korea in April 1951 in place of General Douglas MacArthur and he also took over the responsibility of military governor of Japan.

After the war in Korea, Matthew Ridgway replaced general Eisenhower as the Supreme Allied Commander Europe in 1952 and was preparing for the transition to the North Atlantic Treaty Organization (NATO).

On August 17, 1953, he was appointed Chief of Staff of the US Army and oversaw the engagement of his military forces in Vietnam. He strives to give a still essential importance to the troops on the ground which can not, according to him, be replaced by the nuclear weapons or the aviation. For the duration of his mandate as Chief of Staff, he regularly opposes the strategic vision of Eisenhower, elected President of the United States.

Ridgway quit active service on June 30, 1955. He published his memoirs the following year, under the title: “Soldier: The Memoirs of Matthew B. Ridgway” and in 1967 he wrote “The Korean War”. He is always linked to strategic debates and is heard in many speeches. He is invited by President Lyndon Johnson to the White House to decide on the Vietnam issue in 1968.

He died in his Pittsburgh home on July 26, 1993, at the age of 98, following a heart attack. He is buried at Arlington National Cemetery.