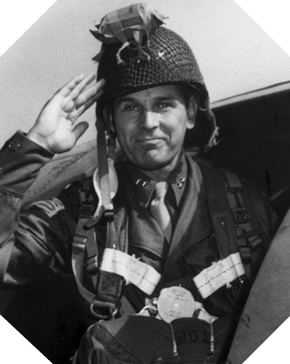 Maxwell Davenport Taylor was born in Keytesville, Missouri on August 26, 1904. Passionate at a very young age through military history and in particular by the American Civil War, he naturally headed for the career of arms.

This brilliant student excels in languages ​​(he studied Greek, Latin, French and Spanish) and decides to present several competitions of officers: he fails at the Annapolis naval academy but passes the exam West Point Academy. Graduated with the rank of second lieutenant in 1922, it was as the youngest officer of his promotion that he turned to military engineering when he left school. In 1926, he was appointed to the artillery and then he moved a few years later to a career as a diplomat.

Not wishing to leave the military institution, Maxwell Taylor is appointed professor of French and Spanish at West Point before joining Tokyo where he learns Japanese. If he was not appointed to the Japanese embassy, ​​he was transferred to Beijing in 1939 as a military attaché.

When World War II broke out, Taylor was posted to the staff of the 82nd Infantry Division (commanded by General Ridgway) which was transformed into an airborne unit. Promoted general in 1942, he participated with the 82nd Division as an assistant to the fighting in Sicily and Italy until July 1943.

He was later named head of the 101st Airborne Division already in England preparing for Operation Overlord when he took command. On the night of June 5 to June 6, 1944, he parachuted with his division over Normandy near the beach of Utah. His paratroopers seized the axes connecting the beach inland so that the dismounted troops are not blocked on the shore. Despite a large dispersion of airborne units and numerous losses, they accomplished their mission with a minimum of resources.

Taylor and his division later defended Carentan, a real road and railroad junction linking the Cotentin to the rest of Normandy, defended by the German paratroopers of the 6th division. On 24 June, while ordering a military ceremony in the liberated commune of Carentan, he was caught in the fire of a German sniper who missed him and shot dead a four-year-old French girl who had come to bring him a bouquet of flowers.

The 101st Airborne was relieved on June 29, 1944 by the 83rd Infantry Division and returned to England to be recompleted and to prepare the continuation of the war. General Maxwell Taylor participated in the Operation Market Garden in Holland, then he was called to go to the United States to attend a staff meeting (Anthony McAuliffereplaced him pending his return). The Germans counterattacked at this time in the Ardennes and encircled the positions of the 101st before beating in retreat. Taylor was extremely affected by not being able to be with his paratroopers during this critical moment.

Kennedy’s coming to power reconciled him with the politicians: at the request of the American president, Taylor returned to service on October 1, 1962 as an assistant to the army chief of staff until 1964. He writes a report concerning the engagement of US military forces in Vietnam: according to him, it is necessary to deploy men and means. This text plays a leading role in the Kennedy administration, which decides to fully commit to the region.

After the Second World War, he was appointed superintendent (also called “sup” by the cadets) of West Point until 1949 before taking command of the Allied troops in Berlin for three years. He went back to the battlefields from 1953 to 1955 in Korea at the head of the 8th US Army.

Thereafter, Taylor continued walking in the footsteps of General Ridgway: he was appointed Chief of Staff of the US Army from 1955 for four years. He took advantage of this period to try to restructure the army to adapt to new modern issues such as the nuclear era, but his proposals gave rise to an outcry in the US administration of President Eisenhower, as this was already the case for Ridgway. Taylor, who did not want the conventional armed forces to be abandoned in favor of the nuclear forces, felt misunderstood and left the army in July 1959. In January 1960, he published a book openly opposed to the defense specialists of the Eisenhower administration , entitled “The Uncertain Trumpet“.

After a second resignation in 1964, he returned to his first love by being appointed Ambassador of the United States to South Vietnam for one year. From 1965 to 1969, he became the special advisor and foreign intelligence director to the president.

He died in Washington on April 19, 1987 from Charcot’s disease and is buried in Arlington National Cemetery.