On 2 June 1943, more than a year before the release of Airel, the inhabitants of the commune witnessed the crash of a P-51 Mustang Type I fighter piloted by Flying Officer Thomas Melville Pethic, a Canadian volunteer aged 21 Years belonging to the 430 Squadron (39 Canada Reconnaissance Wing, No.83 Group, 2nd Tactical Air Force). Touched by the German anti-aircraft defense, he crashes and dies on the spot.

One month after the Normandy landings began, the XIX American Corps commanded by Lieutenant General Charles H. Corlett had to establish a bridgehead west of the Vire in order to progress towards Périers. The Americans must first seize a number of engineering structures to allow their armored vehicles to continue their progress on the other bank of the Vire and the Canal de Vire and Taute. The 30th Infantry Division of Major General Leland S. Hobbs is in charge of seizing Airel then Saint-Fromond where stone bridges must be secured.

The division seized the town of Airel as of July 6, 1944 and found that its stone bridge was only slightly damaged by the bombing. The maintenance work began immediately, while the infantry regiments prepared at the same time the continuation of operations and the capture of Saint-Fromond. On the night of July 6-7, the 117th and 119th infantry regiments set up on their assault base: the 117th Infantry Regiment north of Airel and the 119th Infantry Regiment to the south. The attack was launched at 4.20 am on 7 July. 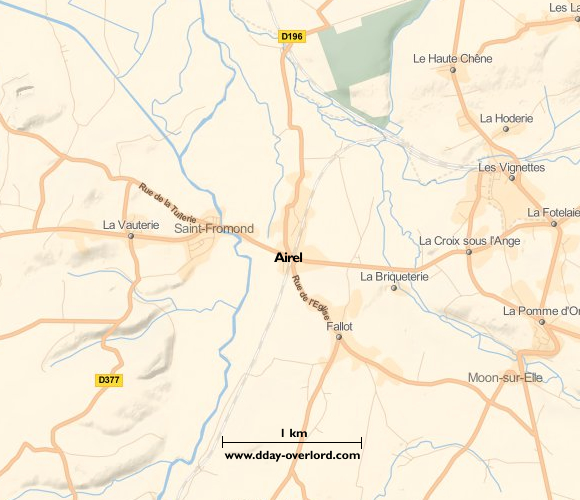