The municipality of Amfreville in the Calvados is located northeast of the “N” drop zone of the 6th British Airborne Division (this area becomes a glider landing area in the afternoon of D-Day). In 1944, there are to the north of this village the hamlets of Le Plain and Le Oger (also spelled Le Hauger or Le Hoger) which today are integrated in Amfreville.

On the night of June 5-6, 1944, paratroopers were reported in the vicinity of Amfreville, men of 9 Para Battalion commanded by Lieutenant-Colonel Otway. The latter seized the battery of Merville and destroyed the guns at 5 o’clock in the morning. According to his orders, he later headed to the hamlet of Le Plain (with about 80 survivors) at the height of the castle (which no longer exists) where it must be reinforced by the units landed at Sword Beach on D-Day.

On June 6, 1944, the No.3 and No.4 commandos of the 1st Special Service Brigade (commanded by Lord Lovat) landed at Sword and progressed towards the bridge of Bénouville. In the early afternoon, the No. 3 Commando seized Amfreville and settled in defensive in the area. It is reinforced at around 8 pm by No. 4 Commando, composed of the survivors of the French volunteers under the command of Commander Philippe Kieffer. Hard fights were committed with numerous artillery duels particularly deadly.

Numerous counter-attacks carried out by the 346. Infantry Division, reinforced during the first days of the Battle of Normandy, did not allow the Allies to retreat in this sector. 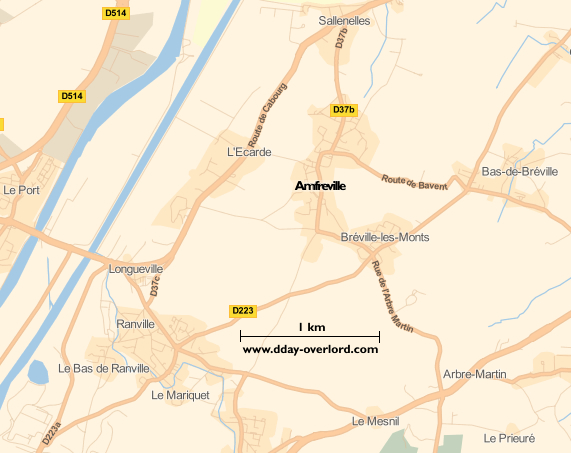