On June 10, 1944, Catz was one of the preliminary objectives of the 3rd battalion of the 327th Glider Infantry Regiment (armed by the 1st battalion of the 401st Glider), at the launch of the offensive by US airborne and airborne troops to capture Carentan. Infantry Regiment). The airborne soldiers advance from north to south and reach the hamlet of Catz without encountering any particular difficulties. They seize it and leave several elements on the spot while companies A, C and G continue their progress towards the west.

At 3 pm, it is in the area of ​​Catz that the junction between the Cotentin and Calvados troops takes place: the 29th Reconnaissance Troop (29th Infantry Division) under the command of Captain William H. Puntenney makes contact with the elements of the 3rd Battalion of the 327th Glider Infantry Regiment.

As early as June 14, 1944, the 826th Engineer Aviation Battalion (EAB) built an aerodrome for the benefit of the US Air Force near the place called La Fourchette, marking the junction between the national road 13 (Paris-Cherbourg) and the national road 174 (Vire-Cherbourg). If the runway length of 1,524 meters (5,000 feet) is not fully completed until June 26, 1944, aircraft will land there as early as June 19. This aerodrome, named ALG A-10, serves as the base for the 50th Fighter Group (10th Fighter Squadron, 81st Fighter Squadron, 313rd Figther Squadron) equipped with P-47 Thunderbolt and the 367th Fighter Group (392nd Fighter Squadron) equipped with P-38 Lightning. Its proximity to the military hospital of Saint-Hilaire-Petitville facilitated the evacuation of the most serious wounded soldiers to England. 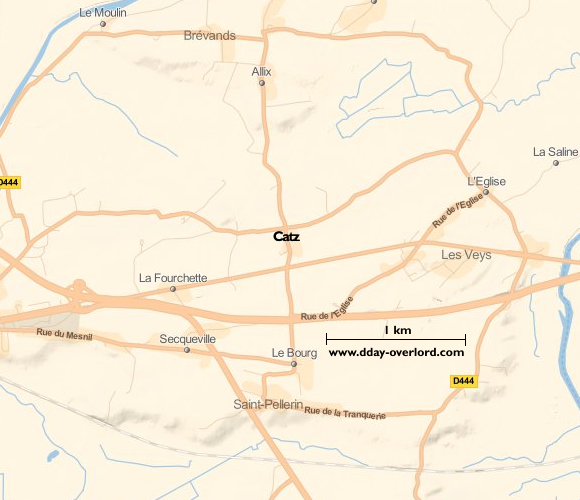