On July 8, 1944, the 120th Infantry Regiment (30th Infantry Division) commanded by Colonel Hammond Birks progressed along County Road 8 in a southwesterly direction to the village of Le Dézert (spelled Le Désert in the early 20th century). It seized it in spite of the resistance of the SS Panzer-Division “Das Reich” which counter-attacked the village on July 9: the German offensive was countered at noon with the support of American artillery and Tanks of the 743rd Tank Battalion. The next day, the 39th Infantry Regiment (9th Infantry Division) commanded by Colonel Harry A. Flint takes into account the Dézert perimeter while the 120th Infantry Regiment (IR) deviates to the southeast. The 1st battalion of 39th (IR) is positioned at the head of the regimental device in front of the Dézert on the left flank with the 2nd battalion to its right. The 3rd battalion is in reserve, 1,500 meters to the northeast.

Shortly before midnight on July 10, 1944, reports of enemy armored personnel movements were detected south of Le Dézert; It is the Panzer Lehr Division which launched a violent offensive with the 1st battalion of its Panzergrenadier-Lehr-Regiment 901 reinforced by two anti-tank companies in the early hours of 11 July. The Germans want to take advantage of the widening gap between the positions of the 9th Infantry Division to the west and the 30th Infantry Division to the east. The Americans were shaken by this German breakthrough and the 1st battalion of the 39th IR had to retreat about 550 meters along the departmental 8, temporarily abandoning the commune of the Dézert. The American artillery shells succeeded in stopping the German offensive and the 39th IR could finally seize the village on 12 July, discovering along the way the numerous wrecks of vehicles of the Panzer Lehr Division, reduced to 50% Of its workforce.

The 39th IR retains its position in the Dézert sector for a few days, the Germans multiplying infiltrations across the front line. On July 23, a sniper hit Colonel Flint in the streets of the village. He died the following day from the consequences of his wound. 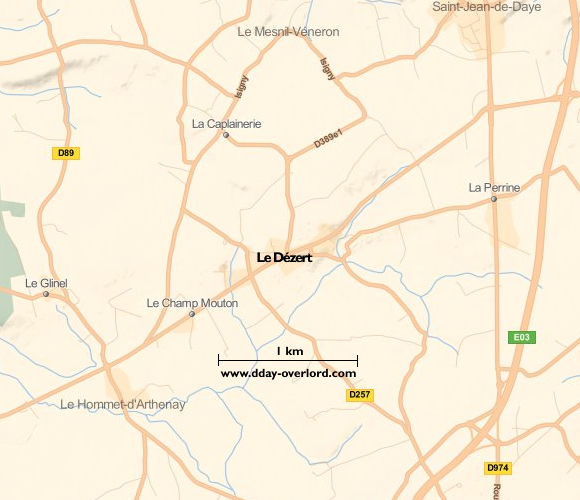