The hamlet of Le Motey is under the administration of the municipality of Amfreville and is placed in the spring of 1944 under the responsibility of Grenadier-Regiment 1058 (91. Infanterie Division). It lies at the western end of the passage on the Merderet River and across the flooded land of the area. This road, which is 500 meters long, becomes a priority objective for the Allies during the preparation phase of Operation Overlord: its control depends on maintaining the bridgehead in the Cotentin which is surrounded by the Douve in the south and the Merderet to the west.

As of June 6, 1944, the hamlet was crossed several times by German forces as well as by American forces. The fighting for the liberation of Le Motey began on June 9, 1944. On the same day, the 3rd battalion of the 325th GIR (armed by soldiers belonging to the 2nd battalion of the 401st GIR) stormed the causeway of La Fière after A fifteen-minute artillery barrage between 10.30 am and 10.45 am. Progressively and painfully, the sections reached the west bank of the Merderet and set up an interdiction in front of the hamlet of Le Motey: during the fighting and in the area of Le Motey, the soldier Charles N. DeGlopper realizes a heroic action to cover his comrades, at the price of his own life.

The companies of the 3/325th GIR (2/401st) facing Le Motey are distributed as follows from north to south: company F, company E and company G. The men of Company F commanded by Captain Harney Climb to the hamlet to widen the perimeter of the bridgehead west of the roadway. A heavy machine gun in shooting position is destroyed by the airborne soldiers in the grenade: the assault forces the Germans to withdraw and they leave the hamlet. Company F begins its installation by securing, in particular, the central crossroads when the American artillery is raining the shells on the hamlet. The report of assault and capture of the hamlet did not rise high enough in the hierarchy and the staff of the 82nd Airborne Division remained convinced that the Germans were regrouping at the Motey in order to counter-attack towards La Fière. The shells wound and kill friendly soldiers, especially paratroopers commanded by Captain Robert D. Rae of the 507th Parachute Infantry Regiment progressing on the right flank of Company F. Despite everything, the Americans are holding on. They received a few moments later a new artillery fire, German this time, and must constantly face small arms fire. Shortly after midnight, the situation became more calm.

On June 10th, at 5 am, the 357th Infantry Regiment commanded by Colonel Philip H. Ginder and belonging to the 90th Infantry Division crossed the road and reinforced the troops in the Motey area. While the 3/325th GIR (2/401st) holds its position, Colonel Ginder’s men continue their offensive towards the west: they seize the hamlet of Le Motey but are stopped in the afternoon against Amfreville. The 357th Infantry Regiment is still waiting for another day before it can resume its action and thus move away the Motey front line. 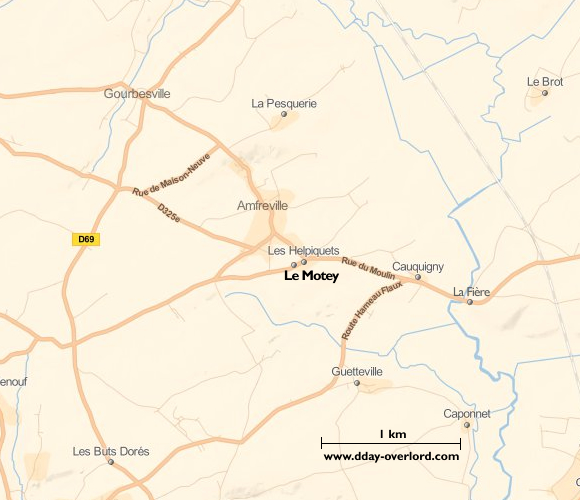