Maupertus-sur-Mer in 1944 – Manche – Battle of Normandy

During the period of the Occupation, the Germans seized the French Air Force airfield situated to the southeast of the commune of Maupertus-sur-Mer which includes a grass track of 1,000 meters Of length and they fortify it against possible adverse air attacks. In 1941, they pave the track and extend it to 1,700 meters.

After the landing of Normandy, the Americans advanced towards the north of Cotentin from 19 June 1944: they aimed at Cherbourg and the key points in the vicinity, including the Maupertus aerodrome. As early as June 20, the 22nd Infantry Regiment (4th Infantry Division) commanded by Colonel Hervey A. Tribolet deployed patrols to the defensive positions prohibiting access to the south of the runway to search for disposition and value information Of German units. The next day, June 21st, the regiment was ordered to seize Hill 158, a height south-west of Maupertus-sur-Mer which dominated the region and in particular the aerodrome. After the start of an artillery preparation, the 1st and 3rd battalions of the 22nd Infantry Regiment, supported by the tanks of Company B of the 70th Tank Battalion, began their advance at 4 pm. They were taken to task by enemy anti-aircraft guns and in the early evening, the 1st battalion was stopped by the German artillery. The 3rd Battalion, commanded by Lieutenant-Colonel Arthur S. Teague, nevertheless managed to secure the area around Hill 158 and set up a defensive device for the night. They do not have time to blow that the Germans counterattack from the south-east: these are units belonging to the Kampfgruppe Rohrbach who bypassed the 22nd Infantry Regiment to attack them from the flank. Grenadier-Regiment 729 (709 Infantry Division), Oberst Helmuth Rohrbach, is the commander of the Grenadier-Regiment 729. He is a member of his Task Force (in German: Kampfgruppe) Regiment 739. The Germans cut off communication and supply lines from the 22nd Infantry Regiment (IR), which is isolated from the rest of the 4th Infantry Division.

The next morning, 22 June, the 2nd battalion of 22nd IR under the command of Major Earl W. Edwards attacked in the direction of Hill 158 to re-establish liaison with the 3rd Battalion and to put an end to his isolation. A supply convoy of food and ammunition is also sent, escorted by tanks, but he is caught under the fire of artillery and heavy German machine guns: suffering heavy losses, he is obliged to turn around . A second convoy is deployed: it falls into an ambush and the Americans record the loss of two light tanks, three semi-tracked, three 57 mm anti-tank guns and several Jeep. The 22nd IR is unable to continue the progress towards Cherbourg. Throughout the day, elements of the German Kampfgruppe Rohrbach continue to infiltrate through American lines, preventing 22nd IR from coordinating its actions to capture Maupertus-sur-Mer and its airfield. Colonel Tribolet’s soldiers once again valued their defensive positions for the night.

On June 23, the American infantry received support from the 4th Reconnaissance Troop (4th Infantry Division), tanks of the 24th Cavalry Squadron and Squadron B of the 801st Tank Destroyer Battalion. Throughout the day, the infantry battalions consolidated their lines and reduced pockets of resistance located in the immediate vicinity of Hill 158, supported by the American artillery which pounded the opposing line, in order to prepare for the attack of the 2nd Battalion in West direction while the rest of the 22nd IR remains in front of Maupertus-sur-Mer. The regiment can thus cover the fighting of the take of Cherbourg against the German forces located in the northeast of Cotentin. The offensive was launched at 1930 hours but was quickly stopped by German shots.

It was not until June 26 that the 22nd IR was able to resume the offensive again. At 11 am, the 1st and 2nd battalions attacked the aerodrome, while the 3rd battalion concentrated on the commune of Maupertus-sur -More further north. After several hours of fighting during which the cannons of the 44th Field Artillery Battalion were to be engaged, the 1st Battalion succeeded in seizing the southern part of the defensive installations and the 3rd Battalion seized the village of Maupertus as well as the northern part of the aerodrome. The 2nd battalion, at the center of the device, fell on guard to the west of the German defenses.

It was not until the following day, June 27, that the Americans finally took possession of the entire aerodrome. 22nd IR continues its course and then attacks the German batteries and support points north of Maupertus-sur-Mer.

Following the release of the aerodrome, the engineers of the 850th Engineer Aviation Battalion are working on demining the position (600 shells and mines are discovered on site) and the runway is reopened on 28 June and extended to reach The 1850 meters. They reinforce it from July 9 by installing Pierced Steel Plank (PSP) and extend it again to finally reach 2,000 meters in length. The 877th Airborne Engineer Aviation Battalion reinforced on July 11th and developed a second paved runway with a length of 1,828.80 meters (6,000 feet). The Maupertus airfield, called ALG A-15, is used by both Fighter Squadrons and Bombard Groups because of the size of the runways. It was operational until December 1944. 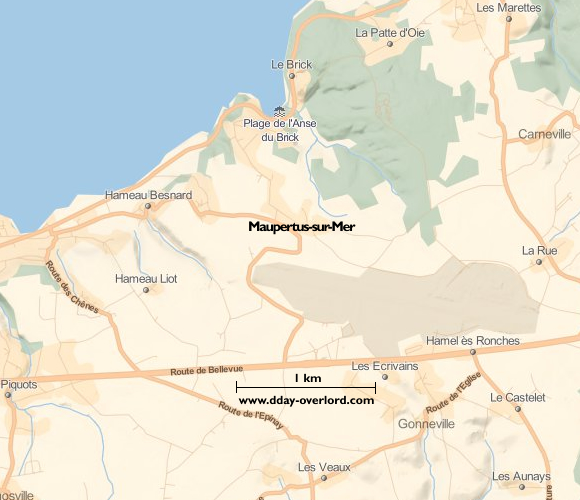