Notre-Dame-de-Cenilly in 1944 – Manche – Battle of Normandy

On June 13, 1944, the P-51 Mustang aircraft, piloted by Lieutenant William R. Perkins, belonging to the 356th Fighter Squadron (354th Fighter Group) was hit and crashed on the grounds of Notre-Dame-de-Cenilly.

On July 27, 1944, on the third day of the land component of Operation Cobra, aimed at breaking through the German front line south of the Cotentin, the 2nd Armored Division was at the forefront of the assault. Combat Command B, under the command of Brigadier General Isaac D. White, maintains pressure on the German forces to prevent them from reorganizing: he fights elements of different enemy units, including the 17. SS Panzer-Division “Götz Von Berlichingen”, 275. Infanterie-Division and 353. Infanterie-Division. The commune of Notre-Dame-de-Cenilly was soon reached, but General White was ordered to slow down because the formidable American breakthrough stretched the front and weakened it, being now exposed to attacks on the flanks.

The 4th Infantry Division is committed to reinforce the area around Notre-Dame-de-Cenilly from July 28th, while the Germans counterattack north of the commune with the support of their artillery and armored vehicles to cut the US supply lines. Until July 30, attacks and counter-attacks multiplied, but the Germans were unable to break through: the lack of coordination of their actions, which was mainly due to the major communication problems, prevented any success.

Behind a German prisoner aboard a Kübelwagen, soldiers belonging to the 2nd US Armored Division neutralize a MP 40 machine gun. Photo: US National Archives. 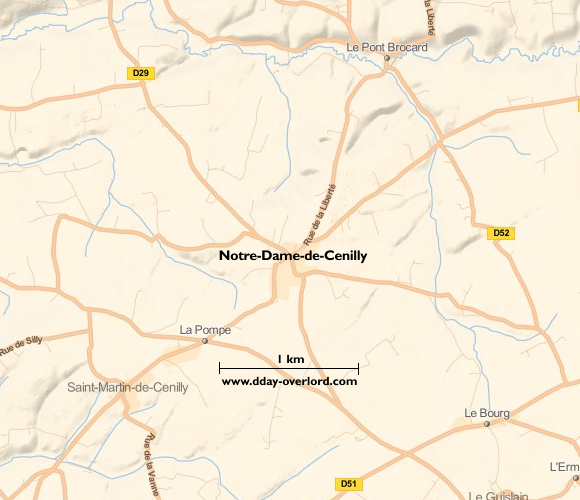