Périers-sur-le-Dan in 1944 – Calvados – Battle of Normandy

The 3rd Infantry Division, which landed at Sword Beach on 6 June 1944, progressed towards the Caen-Bayeux road and by the end of the morning the King’s Shropshire Light Infantry soldiers, belonging to the 185th Infantry Brigade, Périers-sur-le-Dan. However, the Germans slowed down the English advance by engaging the landed troops from the outskirts of the faubourg de Beuville.

Taking advantage of the armored support of the Staffordshire Yeomanry Regiment and the reinforcement of the Royal Norfolk Regiment attacking Beuville, the King’s Shropshire Light Infantry succeeded in seizing Périers-sur-le-Dan and its heights which dominate part of the region . This key position was exploited by the Staffordshire Yeomanry, who was prevented from doing so when the 21. Panzer-Division launched a counter-attack towards the coast: this offensive failed because of the decisive action of the deployed British anti-tank guns Along the crest of Périers-sur-le-Dan.

On the evening of June 6th, Staffordshire Yeomanry Regiment C squadron set up for overnight surveillance in the south and south-east to support the 9th Brigade of the 3rd Division English infantry in the direction of the commune of Mathieu.

The commune of Périers-sur-le-Dan is located in the immediate vicinity of the ALG B-10 airfield located south of Plumetot and built by the British on June 10, 1944. 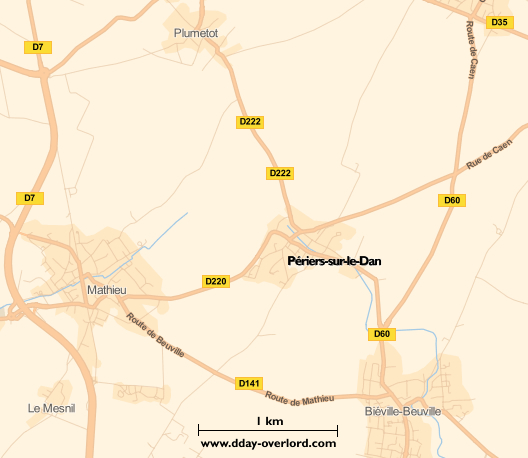