Pouppeville in 1944 – Manche – Battle of Normandy

In the spring of 1944, the small village of Pouppeville was occupied by some sixty personnel belonging to the Grenadier-Regiment 919 (709. Infanterie Division). It is located on one of the five roads connecting the coastline inland by crossing the areas deliberately flooded by the Germans. The Allies coded the local road 329 “Exit 1”: they order the 506th Parachute Infantry Regiment (PIR) of the 101st Airborne Division to seize Pouppeville.

But on the night of June 5 to 6, 1944, the parachuting did not go as planned for the 101st Airborne and very many paratroopers were not dropped in the right place. At six in the morning, without news of the units of the 506th PIR in charge of seizing Pouppeville, General Maxwell D. Taylor (commander of the 101st Airborne Division) and Brigadier General Anthony C. McAuliffe (commander of the 101st Divisional Artillery) order Lieutenant-Colonel Julian J. Ewell (commanding the 3rd battalion of the 501st PIR) at the head of forty of his men south of Sainte-Marie-du-Mont to carry out this priority mission.

Arrived at the outskirts of Pouppeville around 9 o’clock, Ewell and his men immediately engaged the fight despite an unfavorable balance of power. During three long hours until noon, the paratroopers fought a furious battle from house to house: 18 paratroopers were killed or wounded, the Germans recorded the loss of 25 of them, to which 38 prisoners had been added. Some soldiers of the Grenadier-Regiment 1058 retreated towards the coast, that is to say, towards the American landed forces: they are trapped. General Taylor sent couriers to establish liaison with the disembarked troops, in order to avoid possible fratricidal shots as they approached Pouppeville.

The 2nd battalion of the 8th Infantry Regiment (4th Infantry Division), commanded by Lieutenant-Colonel Carlton O. MacNeely, joins the paratroopers in Pouppeville, thus securing exit number 1. Early in the afternoon, soldiers Airborne belonging to the 1st Battalion of the 506th Parachute Infantry Regiment reached the village, not yet knowing that it was in the hands of the Americans. Pouppeville is also crossed by several platoons of the 70th Tank Battalion. 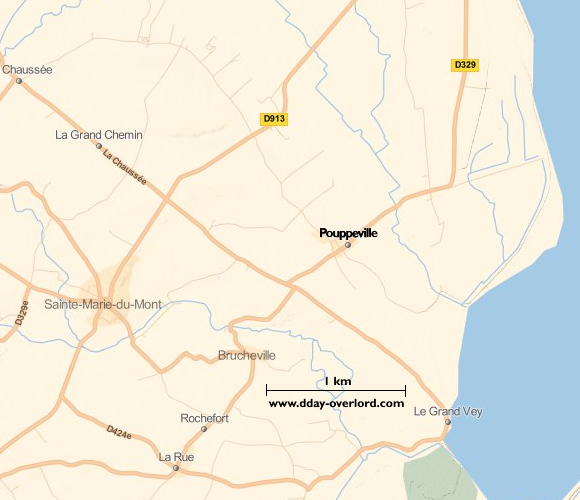