Ranville in 1944 – Calvados – Battle of Normandy

The British and Canadian airborne forces belonging to the 6th Airborne Division were responsible for capturing the western and eastern shores of the Orne river on the night of June 5-6, 1944, which were held by the 716 Infantry Division. This operation is known as Operation Tonga. It is the 13th Battalion Parachute Regiment (5th Para Brigade) commanded by Lieutenant-Colonel Peter Luard who is in charge of seizing the town of Ranville in the first minutes of the airborne assault allied in Normandy. It is reinforced by the 12th Yorkshire Battalion Parachute Regiment (5th Para Brigade) commanded by Lieutenant-Colonel Johnny A. P. Johnson. One of the specific objectives also taking place on the territory of the commune of Ranville is the taking of a bridge over the Orne (Operation Deadstick) by airborne soldiers commanded by Major John Howard (D Company, 2nd Battalion Oxfordshire & Buckinghamshire Light Infantry – 2nd Ox & Bucks -, 6th Airlanding Brigade).

The commune of Ranville is located to the southwest of the drop zone coded “N” and dedicated to the regiments of the 5th Para Brigade. It is also located to the south-east of the bridges over the Orne and the Canal de Caen, on a terrain from which it dominates a large part of the region: this locality is a real lock that allows access to the north of Caen and which has views on the sector as a whole.

The first to intervene in the area of ​​Ranville are the air-transported soldiers of Major Howard who seize the bridges over the Orne (baptized from Horsa Bridge) and on the Caen Canal (Pegasus Bridge) shortly after 00h30. They secure the area until the arrival of the Allied troops arriving at the dawn of D-Day on Sword Beach.

The English paratroopers of the 13th Battalion Parachute Regiment jump on the Drop Zone “N” in two waves at 00h56 and 01h00. The Regimental Rally Point is located immediately north of Ranville. Around 2 o’clock in the morning, Lieutenant-Colonel Luard succeeded in gathering about 60% of his unit and began the assault of Ranville. The three companies A, B and C of the regiment then settled in prohibition all around the commune. The other paratroopers are dispersed in the vicinity, mostly lost.

The 12th Yorkshire Battalion Parachute Regiment is dropped to the same jump zone at 01:03 and like its predecessors, only 60% of the paratroopers are present at the rally point (located about 500 meters northwest of Ranville, near the departmental road 514) one hour after the start of the dropping. The three companies have also begun to set up their operations. They are responsible for protecting the southern approaches to Ranville at the Le Bas de Ranville site.

Alerted by the reports of the 716. Infanterie-Division soldiers who are unable to control the situation, the 21. Panzer-Division orders around 2:30 am on several mechanized patrols to recognize the western and eastern shores of the Orne. The advanced elements of the Panzergrenadier-Regiment 125 commanded by Major Hans-Ulrich von Luck made contact with the 6th Airborne Division at 3 o’clock in the morning. The 12th Yorkshire 17-Pounder anti-tank guns positioned at the bottom of Ranville that the English transported by glider push back the opposing patrols. Meanwhile, General Gale commanding the 6th Airborne sets up his command post in Ranville.

At the dawn of D-Day, the Ranville sector is under British control but it is still necessary to wait until the beginning of the afternoon so that the municipality is entirely freed from any occupant.

At 9 pm on D-Day, Operation Mallard takes shape above the landing zone “N” and the other companies of the 2nd Ox & Bucks land in gliders and then rejoin the commune of Ranville.

Several German counter-attacks carried out by the 21. Panzer-Division and the 346. Infantry-Division to pierce the front fail, especially on 9 and 10 June.

In the second half of July, General Montgomery launched a new offensive to capture Caen from the eastern Orne: Operation Goodwood. On July 18, 1944, British troops massed in the area, crossed Ranville and then progressed full south after one of the most important artillery fire of the Battle of Normandy. After that date, Ranville is definitely out of reach of the Germans. 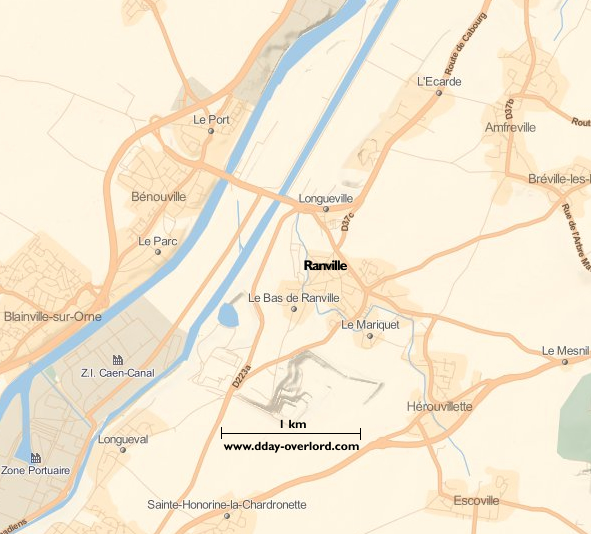