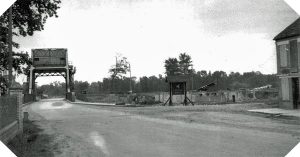 The bridge of Benouville, known as Pegasus Bridge – Euston I

The order of mission, signed by General Gale commanding the 6th Airborne Division, was to “capture intact the two bridges of the Orne and the canal of Caen, Bénouville and Ranville … The capture of these two bridges, which will be known as operation Deadstick, is based essentially on the surprise effect, the mission execution speed and the determination to overcome. Counter-attack will be expected and we will have to hold our positions until the arrival of the changing troops“.

The aim of this mission is to secure the left flank of the invasion since there is only one crossing point over the Orne river and the Caen canal, located between the localities of Ranville and Bénouville: these two towns naturally became the main objectives of the 6th British Airborne Division.

Probably no commando operation has been more thoroughly prepared: two virtually identical bridges in England were used to train a hundred or so soldiers, all volunteers under the command of Major John Howard. This training, repeated many times, was according to Major Howard one of the most difficult of the British army. Jim Wallwork, one of the pilots of the three Horsa gliders who were take part in the assault (each transporting about 29 soldiers with their equipment), said: “We carried out many landing exercises, some in normal day conditions, others also in daytime but with tinted windows, and finally night workouts.

The bridge of Bénouville was coded “Euston I”. In the night of 4 to 5 June 1944, 24 hours before the general assault, nine paratroopers were dropped near the landing zones coded X” and “Y”. They were responsible for contacting the local resistance of which one of the members was holding a coffee in Bénouville, Louis Picot.

Click here to discover the history of the assault on Horsa Bridge, “Euston II”, in Ranville.

Conduct of the assault

Operation Deadstick, part of the operation Tonga, began on June 5, 1944 with the Halifax bombers taking off towing the six Horsa gliders starting at 22:56. Glider troops, led by Major John Howard, set off in the night and broke their trailer over Cabourg at a height of 6,000 feet. They arrived in the area of ​​the objective in the early hours of June 6, 1944, shortly after midnight.

The descent of the gliders was rapid and the absence of pressurization caused an important discomfort for the airborne soldiers who were forced to blow through the nose while closing their nostrils with the hand to fight against this phenomenon.

The three gliders charged with the bridge of Bénouville – codenamed “Pegasus Bridge” because of the nickname of the 6th division: Pegasus – landed less than 50 meters from the bridge. The surprise is total. The bombers towing the gliders, obviously making noise, were spotted by German sentries long before the gliders land, but the Wehrmacht infantry were unaware that Allied planes were towing gliders. To camouflage the operation, Allied motor planes bombarded a cement factory located a few kilometers further south of the objectives of the British 6th Airborne Division. Thus, the Germans believe that the planes fly over the area only to bomb the cement plant. The young sentry of Slavic origin and barely 17 years old however hears a deaf and strange noise a few tens of meters east of the bridge. This soldier said to himself: “it is surely one of the bombers which crashed near the bridge, it was shot down by anti-aircraft artillery from Caen”.

The soldier thus remains a few seconds to look in the dark night towards what he believes to be the wreckage of a bomber, thinking that perhaps one of the pilots will have survived. But the British soldiers, after a few seconds spent recovering from their emotions, successively emerge from their glider and infiltrate the blockhouses while storming the bridge. In one of the underground bunkers where the few German infantrymen sleep, some wake up because of strange noises. And when one of them leaves his dormitory to join the access corridor illuminated by the dim light of the bulbs, he discovers enemy soldiers, crouching, advancing slowly in his direction. British commandos have no choice but to use their Sten submachine guns. The guns of the automatic weapons crackle and the German falls, dead. But the alert is given, the shot having served as an alarm.

Flares were thrown, panic among the Germans was complete. They started shooting in all directions while the British crosed the bridge, covered with smoke grenades. They fired phosphorous grenades into machine gun nests which exploded almost immediately. The British picked up the bridge’s firing machine from one of the underground bunkers and put it under cover – the Germans never wanted to use it to destroy the bridge. Their duty was to protect it. The bridge did not risk anything!

The message of victory “Ham and Jam” (“ham” indicating that the British glidermen seized both bridges and “Jam” that both bridges were intact) was immediately sent to the allied ships after the assault via a traveling pigeon.

Major John Howard blew for long seconds in his whistle to inform all Allied soldiers in the area of ​​his men’s success: on drop zone “N”, north of Ranville, General Nigel Poett commanding the 5th Para Brigade heared the sound of the whistle shortly after reaching French soil.

For Major Howard and his men, a long night began.

Several German motorized units were stationed in the surrounding villages. Having heard explosions and shots (and alerted by the presence of allied paratroopers announced in the different headquarters in Normandy), the Germans came to inspect the surroundings but never approached the bridge: indeed, they knew that a training with blank cartridges was organized the same night for the men in charge of the defense of the bridge. They confused the shooting with a training. Only a light armored vehicle took the road to Bénouville and presented itself before the British paratroopers, who destroyed it with the only PIAT (Projectil Infantry Anti Tank) in their possession. But, strangely, no other armored vehicle came to disturb them during the rest of the night.

The civilians, too, were mostly informed that an exercise was being organized by the Germans around the bridge. Maurice Chauvet, veteran of the 1st battalion fusiller marin commando (commando Kieffer) said: “Louis Picot, local resistance fighter, was the owner of one of the cafes closest to the bridge (on the site of the current bar-restaurant” Les 3 gliders “). He went out to find out the reasons for these shots a few meters from his house. Suddenly the Norman collapsed, shot down”. The British glidermen rush into his café and quickly check the premises before continuing their mission. At the same time, the small tram station between the Café Picot and the bridge over the Caen canal is checked by William Gray, member of No. 25 Platoon, Gray indicates that after having supported the crossing of his section with his Bren gun (between 00:17 and 00:18), he ran in the direction of this building (now disappeared) in front of the Gondrée café. He throws a grenade inside and then engages in it, discovering that the rooms are empty. The building is now in British hands.

Thus, contrary to what is often presented, the small tram station could be the first building freed in France on Tuesday, June 6, 1944, while the Gondrée house only opened its shutters and its door several hours later.

At daybreak, the 6th Airborne heard the aerial and naval bombardment of the landing beaches and impatiently awaited the arrival of the commandos. Throughout the night and during the morning, the Germans tested the British device around the Bénouville and Ranville bridges, attacking the points of resistance with mortar. Major Howard’s men have little heavy equipment and more and more are injured. Shortly after 10:00 a.m., while several British paratroopers who got lost in the area reached Howard’s position, two minesweepers fleeing the landing at Ouistreham to join Caen presented themselves opposite the bridge: the first gunboat was hit by a shot. of PIAT and sinks immediately. The second manages to turn back to Ouistreham. But the English were not at the end of their sentences: the Germans decided to destroy the Bénouville bridge by an air attack. A Junker 88 manages to drop his bomb with precision and it ricochets off the bridge without exploding and falls into the canal.

The French commandos arrived from Sword Beach in the morning, accompanied by British soldiers of the 1st Special Service Brigade commanded by Lord Lovat – the latter accompanied by the famous bagpiper Bill Millin. The junction was carried out at 13:32 pm with Howard’s men by having 2 minutes 30 seconds behind the scheduled schedule, which Lovat took the trouble to apologize.

In the afternoon, around 04:00 pm, the French volunteers of Kieffer commando number 4 reach the bridge, which is still beaten by the German fires. Smokes are sent. As he crosses the bridge, radio operator Mullen, a Kieffer commando member who landed at Sword in the morning, hears a bullet ricocheting right behind him on the deck structure. When he turns around, he sees in the smoke one of his wounded friends (this soldier dies a few moments later as a result of this injury) by the bullet of a sniper, a German sniper. He lowers to help but is hit by a sniper and collapses, lifeless. His brothers in arms, including Maurice Chauvet, wanted to put a commemorative plaque on the Pegase Bridge that can currently be seen in the Pegasus Memorial Memorial Museum in Ranville.

Assessment of the assault

Operation Deadstick, with the objectives Euston I (Bénouville) and Euston II (Ranville), was a total success.

Two airborne soldiers, including one officer, died during the assault on the two bridges. 14 others were injured. The mission was filled for Howard who had joined the amphibious troops and entrusted the protection of his objectives to the Warwickshire regiment. They then left the position to reach the town of Escoville.

It is an attack that seems “perfect” but which benefited from a miraculous chance. Indeed, if the operation is a total success, it is thanks to a series of unpredictable circumstances (the famous fog of war by von Clausewitz) that all played in favor of the British. The successful assault of this bridge offered the Allies a key control point to protect the left flank of their bridgehead against possible German attacks.