Rocheville in 1944 – Manche – Battle of Normandy

On April 27, 1944, in preparation for Operation Overlord, the Allies carried out a series of bombings in Normandy. One of them, ensured by Boeing B-17 Flying Fortress aircraft belonging to the 384th Bomb Group, targets the V2 rocket construction site of Sottevast shortly after 10.45 am. The German air defense manages to hit the B- 17 numbered 42-97136, piloted by lieutenants Herbert W. Small and Roy J. Morris: the aircraft caught fire then exploded in an imposing spray of flames above Rocheville, before the crew even manages to get out of the cabin. The lifeless bodies of the ten crew members were found near the village church and were buried in the Cherbourg cemetery two days later. Debris from the bomber were found within a radius of almost three kilometers around the place of the explosion.

On 19 June 1944, the day after the liberation of Barneville-sur-Mer, which enabled the isolation of nearly 40,000 German soldiers north of Cotentin, the Americans launched a new offensive towards the north. The 4th Cavalry Squadron tanks, posted in the center of the Cotentin, were responsible for illuminating American progress during the morning: the Troop E and the F squadron made a breakthrough of nearly 10 kilometers to Rocheville. As they approached the village, the Americans were attacked by about a section equipped with anti-aircraft guns and captured them by a coordinated maneuver: the Troop E fell in support and opened fire on Rocheville while the landed troops from Troop A and Troop C, accompanied by tanks from the F squadron, mounted an assault on German positions.

In the late afternoon, soldiers from the 1st Battalion of the 359th Infantry Regiment (90th Infantry Division) reached Rocheville and then continued north. 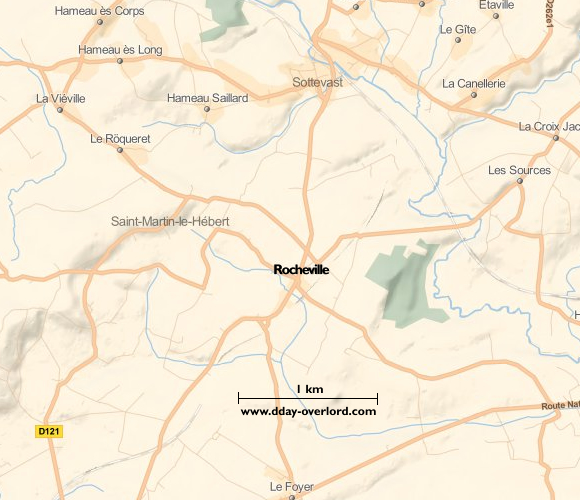