Saint-André-sur-Orne in 1944 – Calvados – Battle of Normandy

The Allies reached Saint-André-sur-Orne as of July 20 during Operation Atlantic, which aims to capture the heights of Verrières Ridge, which overlooks the region between Caen and Falaise. The Commune of Saint-André-sur-Orne, which is held by members of the 272. Infanterie-Division, is taken by the Queen’s Own Cameron Highlanders of Canada (6th Infantry Brigade, 2nd Infantry Division) Canadians to the north. Early in the afternoon, abundant rain falls on the area and considerably hinders operations.

On July 24, 1944, the Allies launched Operation Spring, which aims to capture the heights of Verrières Ridge, which overlooks the region between Caen and Falaise. The commune of Saint-André-sur-Orne is one of the objectives of Spring and is located on the starting line of the offensive. Due to the almost continuous rainfall since 20 July, the intelligence services were unable to use the reconnaissance aircraft to take pictures of the German defense lines and the enemy positions were very little known.

After a major bombardment that took place on the night of July 24-25, the Queen’s Own Cameron Highlanders of Canada climbed once again, supported by the Calgary Highlanders (5th Infantry Brigade) and tanks 27th Armored – Sherbrooke Fusilier Regiment (2nd Armored Brigade, 3rd Infantry Division). They face stiff resistance from the 272. Infantry Division that does not yield. At 8.45, the Germans even launched a counter-attack led by the 2. Generationutnant Panzer Division (Lieutenant General) Heinrich Freiherr von Lüttwitz. The Kampfgruppe (task force) of Werner Sterz is responsible for breaking the Canadian assault: Panzerjäger-Abteilung 38 (equipped with Jagdpanther IV tank fighters) reinforced by Panzer-Regiment 3 Major Schneider-Kostalski. In spite of all the firepower, the Canadians stand firm: they are reinforced on their right flank by the 5th Infantry Brigade and east of Saint-André by the 6th Armored Regiment – 1st Hussars ( 2nd Armored Brigade) and the infantrymen of the Black Watch of Canada (5th Infantry Brigade). The Germans sent the Kampfgruppe Zollhöfer from 9. SS Panzer-Division “Hohenstaufen” to Saint-André-sur-Orne at 1840 hours to break through the new line of defense. The German attack failed.

A new offensive of the 9. SS Panzer-Division targets Saint-André on 28 July but is countered by the Allies who secure little by little the ruins of the village. The Germans were definitely pushed back outside the commune on 1 August, but it was not until the launch of Operation Totalize that the front line moved away permanently towards the south. 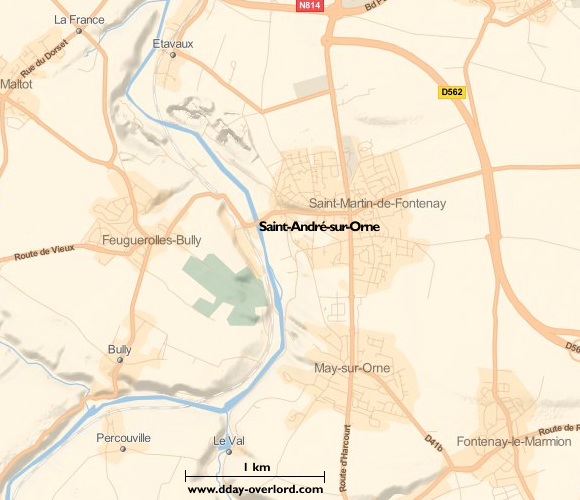