Saint-Pierre-du-Mont in 1944 – Calvados – Battle of Normandy

In the spring of 1944, the village of Saint-Pierre-du-Mont was occupied by artillerymen of the 2nd battery of the Heeres-Küsten-Artillerie 1260 commanded by the Oberleutnant Frido Ebeling and armed the battery of Pointe du Hoc.

On June 6, 1944, the 2nd Ranger Battalion (29th Infantry Division) stormed the German battery by climbing the cliff. Throughout the day, the Germans of Grenadier-Regiment 916, 352. Infanterie-Division counter-attack from Saint-Pierre-du-Mont towards the battery and succeed in containing the American soldiers.

On June 7, 1944 at 11 am, the 5th Ranger Battalion commanded by Lieutenant-Colonel Max F. Schneider, the 1st Battalion of the 116th Infantry Regiment of Lieutenant-Colonel John A. Metcalfe and 10 Sherman tanks from B Company, 743rd Tank Battalion, reached the eastern edge of Saint-Pierre-du-Mont. Shots are exchanged with the Germans who still hold the area, a sniper posted in the church steeple is attacked by the American tanks which partially destroy the building. Attacked along the coastal road and bombed by mortar shells, these elements chose to fall back to Saint-Pierre-du-Mont for the night, having lost 40 of theirs. The next day, June 8, at 10 am, the Americans break through the German line and establish liaison with the survivors of the 2nd Ranger Battalion at Pointe du Hoc.

Starting June 9, the American engineers of the 834th Engineer Aviation Battalion build an aerodrome called ALG A-01, one kilometer east of the battery. The furious fights that took place in the area delayed its installation which ends June 13. The airfield became the main base of the 366th Fighter Group until August 25 and remained operational until September 5, 1944. 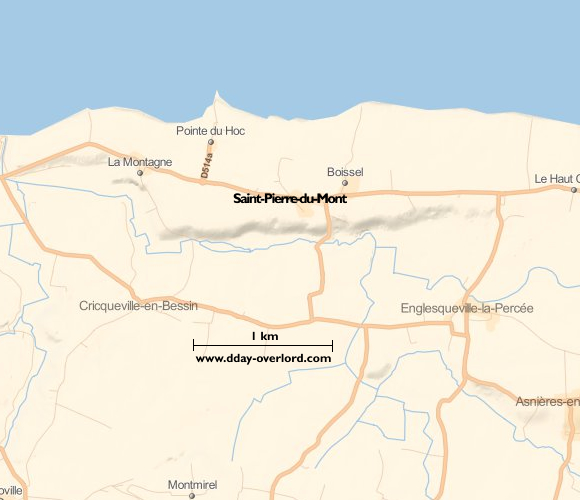