Sainte-Anne in 1944 – Calvados – Battle of Normandy

Before midnight on June 8, 1944, the 3rd Battalion of the 26th Infantry Regiment (1st Infantry Division), commanded by Lieutenant-Colonel John T. Corley, crossed Tour-en-Bessin and progressed towards 355. The battalion, supported by the Sherman tanks of Company C of the 745th Tank Battalion, is opposed to the Grenadier-Regiment 916 ( 352. Infantry Division). The infantry progresses on two columns that integrate six Sherman in front and in the middle of the device. The 3rd battalion reached the hamlet of Sainte-Anne on June 9th at 1:30 am and took possession of it, it was in regular contact with the Germans who folded towards the east.

During the following hours, 1944, US intelligence indicated the imminence of a German counter-offensive armed by reinforcements arriving from the south: the 26th Infantry Regiment (IR) then moved into defense. Captain Billings’ company L is located north of Sainte-Anne, Captain Semanchyk’s company I to the east and Lieutenant Cornwell’s company K to the south. A fine rain begins to fall and visibility falls. At 3 o’clock in the morning, the position of the company L was submerged by a German column which made a withdrawal from north to south: the Americans immediately engaged the combat at very short range and the situation was rapidly chaotic, mixing soldiers, refueling, troops by bicycle… Artillery and naval guns immediately start an imposing barrage centered east and northeast of Sainte-Anne. Two German trucks, loaded with American prisoners of the L company, are about to leave the physical and physical artillery sector: the losses are very numerous.

At 6.30, the 3rd battalion manages to resume on the initial line of defense: 125 German soldiers are taken prisoner. 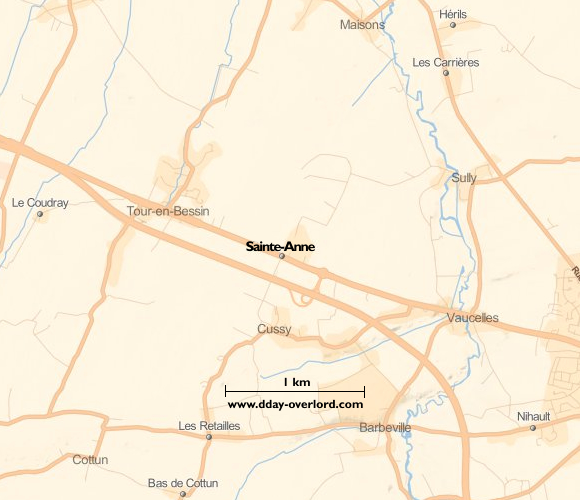