At the end of July 1944, the Americans fully exploited the results of Operation Cobra, the ground part of which began on 25 July. On 31 July, the German defense line armed with survivors of the 352. Infanterie-Division and the 2. Panzer-Division is only 4 kilometers from the town of Tessy-sur-Vire. While the Allied Aviation bombarded targets of opportunity every day in the area, the front forms a salient in this area because Americans gradually encircle the town.

The Americans relaunched the action on the morning of 1 August 1944: Major General Leland S. Hobbs’ 30th Infantry Division attacked from north to south while the 2nd Armored Division’s Combat Command A (CCA), temporarily attached to the 29th Infantry Division of Major General Charles H. Gerhardt, progresses from west to east. At the head of the CCA system, Brigadier General Maurice Rose placed five armored vehicles: a Stuart reconnaissance tank followed by two Sherman tanks and two Destroyer tank fighters. During the progression, a column of German vehicles is destroyed. Later in the morning, three American tanks managed to enter Tessy-sur-Vire, but they were victims of mechanical breakdowns: the crews, who did not benefit from infantry support, were obliged to retreat outside the commune. Indeed, the infantrymen of the 120th Infantry Regiment (30th Infantry Division) are attached to the immediate vicinity of Tessy by small arms fire and mortar shells.

In the early afternoon, the CCA attacked again and this time managed to establish a bridgehead in the city: the 22nd Infantry Regiment (4th Infantry Division) committed itself and began the delicate mission of controlling zoned. Once this work is done, the regiment crosses the Vire and installs defensive positions on the eastern shore. The 120th Infantry Regiment, supported by the CCA armored vehicles, resumed its advance and settled in the northern suburbs of the city. In reaction to the capture of Tessy-sur-Vire, the Germans triggered multiple artillery fire on the commune. These continued until the following day, August 2, 1944.

August 3, 1944: US soldiers particularly tired chose to rest in a cellar filled with barrels of cider. Photo: US National Archives. 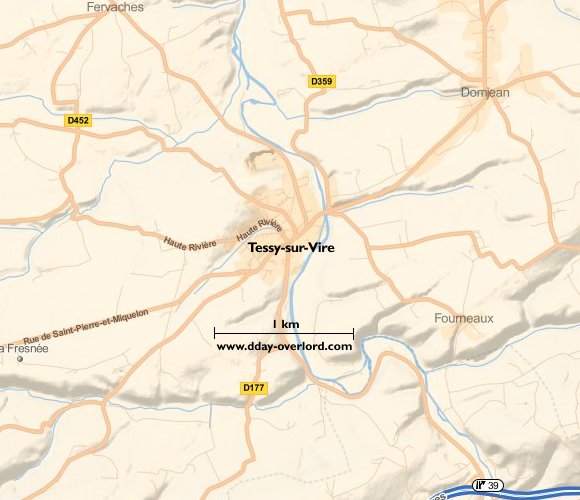