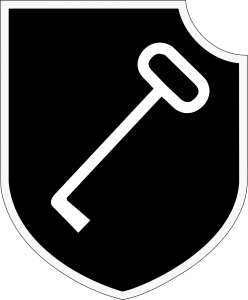 The insignia of the 1.SS Pz-Div

Creation of the 1.SS Pz-Div

On November 10, 1923, for the tenth anniversary of the Hitler brewery’s coup, the soldiers of two Kommandos (who were among the personal guards of the German Nazi Party, the NSDAP) individually vowed to always serve Hitler, and officially received the Leibstandarte appellation Adolf Hitler and are attached to the 1. SS Pz-Div.

The 1. SS-Panzer-Division Leibstandarte SS Adolf Hitler (LSSAH) was created on March 17, 1933 by Hitler’s bodyguard, Josef “Sepp” Dietrich. In June 1923, the unit knows its first actions to behead the group of SA.

The mode of recruitment favored the followers of the National Socialist Party who, if possible, had the Aryan physical type. The unit served as a guard of honor at major meetings of the Nazi party in Munich. Thus, if its soldiers were formidable adversaries, they were also fanaticized from their engagement.

The unit participates in the arrest and execution of Ernst Röhm, member of the SA, then, formed in Death Platoons, takes part in the Night of the Long Knives: on July 13th, 1934, at least 177 civilians are murdered. Then the LSSAH is rearmed, motorized.

In 1935, the LSSAH reoccupied the Saar in 1938 occupies the Sudetenland. In 1939 she took part in the annexation of Bohemia and Moravia. It is then armed with a section of tanks and various motorcycles. She then takes the designation Infantry Regiment Leibstandarte SS Adolf Hitler.

In the middle of 1939, Hitler wanted to make this unit an SS division. It is attached to the 13th Army Corps which is about to attack Poland.

The unit, attached to the 17th German Infantry Division, fiercely fought Polish infantry and cavalry divisions near Pabianice. It is then sent to Holland and France from May 10, 1940 and participates in the attack on the Dunkirk pocket in northern France. Near Wormhoudt, the unit, after continuing its advance contrary to the orders given, suffered very heavy losses by attacking different positions of the British artillery. About 80 British prisoners of war belonging to the 2nd Battalion of the Royal Warwickshire Regiment were then executed by the men of SS-Hauptsturmführer Wilhelm Mohnke.

Sent to Greece following the failure of the invasion of England, the LSSAH was then the size of a brigade. This is the beginning of Operation Marita, which begins April 6, 1941. Four days later, the unit receives the reinforcement of Kurt Meyer, called. On April 30, most Allied troops still on the scene are captured.

Russian front and glimpses of the Normandy front

September 17, 1941 marks the beginning of Operation Barbarossa and the LSSAH receives the name SS-Division Leibstandarte SS Adolf Hitler. The LSSAH is advancing for nearly 960 km through Soviet territory. The fighting conditions are difficult, because of the cold and the problems of refueling. The unit remained on site until July 1942, before being sent to Normandy to be attached as a Grenadier regiment to a new SS armored corps. She receives new equipment, including 9 Tiger 1 tanks.

Back in Russia in January 1943, the LSSAH must defend the Kharkov region. The time is already off the offensive. In the face of the hundreds of Soviet T-34s, the LSSAH must retreat into the ruins of Kharkov. March 21, 1943, after furious fighting, the city remains in the hands of the Germans, but the unit accuses nearly 4,500 losses.

Removed from the front to be rearmed, the LSSAH (attached to the 2.SS-Panzerkorps) counts 12 Tiger I, 72 Panzer IV, 16 Panzer II and Panzer III, and 31 StuG. It is then committed from July 4, 1943 within the framework of the Operation Zitadelle having for objective the region of Kursk. Surprised, the Soviets recoil, before resisting during the battle of Prokhorovka, then force the Germans to retreat. Following the Allied landings in Sicily on the 10th the LSSAH is withdrawn from the front and sent to Italy.

On September 8, 1943, as Mussolini’s army collapsed, the unit was tasked with disarming the Italian soldiers. It was at this period that the LSSAH received its definitive name: 1.SS Panzer-Division Leibstandarte SS Adolf Hitler. Returned to the front of the east, the unit stands out in January 1944 thanks to the action of Michael Wittmann at the head of his Tiger tanks.

In February 1944, the division went to the aid of the Stemmermann group, comprising 56,000 men, trapped by Soviet forces in the Korsun region. Some soldiers manage to escape, but the German losses are high. To rearm and reinforce the division, she is sent back to Normandy.

After the Normandy landings, the LSSAH is sent urgently to the Caen region to restrain the Allied advance. Constantly repulsed, she retreats to Falaise where it is surrounded. Shoved by the naval artillery and allied fighters, the German armored vehicles (which exceed in firepower the Sherman or Crowmell) must retreat.

At the end of the Battle of Normandy, the LSSAH had almost no tanks or armored vehicles and losses of up to 5,000 men. The few survivors managed to cross the Seine, constantly harassed by British forces. The division retreats to Belgium where it is reconstituted. On September 4, 1944, it was ordered to retreat to Germany.

In its ranks are more and more young recruits trained more quickly than their elders. Refueling fuel is difficult to provide. Nevertheless, the division receives the order to go on the attack on December 16 in the Ardennes. It has had many successes, but supply problems, river crossing difficulties and the firepower of Allied aviation put an end to the offensive.

Removed from the Western Front to be sent east, the LSSAH is fighting this time the Soviet troops in Hungary, as part of the last major offensive launched by the Germans, which was to deliver the besieged forces in Budapest. Forced to retreat to Austria, she went to the American forces.

Back to the German ground forces menu