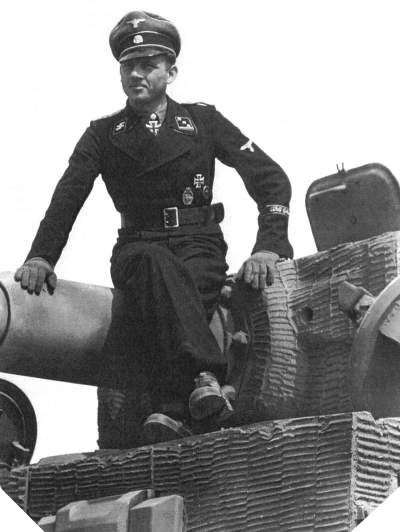 Son of a farmer, Michael joined in 1934 the Reichsarbeitdienst, the German Labor Corps where he worked for 6 months. In October of the same year, he joined the 19th Infantry Regiment as a private. He then joined in 1937 and joined the elite Leibstandarte SS Adolf Hitler division where he received an instruction on armored vehicles (Sd.Kfz.222 and Sd.Kfz.232). Very quickly, he appears as an excellent pilot.

After passing through various armored vehicle training centers, such as the 17th Reconnaissance Squadron, he joined in September 1939, as a non-commissioned officer, a section of Sd.Kfz.232 reconnaissance tanks and took part in the reconnaissance campaign. Poland.

At the end of 1940, after some transfers to various German bases, Michael Wittmann began his career as a tank pilot in the Balkans until mid-1941, in Yugoslavia and Greece, where he commanded a platoon of Sturmgeschütz III tanks.

On June 11, 1941, Wittmann was transferred to the Eastern Front as part of Operation Barbarossa, which began on June 22. Fighter in the south of the Russian front, he was wounded in action during the summer of 1941. Michael Wittmann receives as decoration, among others, the medal of the assault in Panzer, for having destroyed six Soviet tanks during a single engagement in September. 1941.

In the early spring of 1943, he received command of a Tiger tank company. His baptism of fire in Tiger tank takes place during the Zitadelle operation that targets the city of Kursk. During the first day of the attack, Wittmann destroyed thirteen Russian T-34 tanks and two anti-tank guns. By his actions, he prevented the destruction of the platoon of Helmut Wendorff who was under violent fire. In total, at the end of this operation, Wittmann destroyed thirty Russian tanks and twenty-eight antitank guns. Until October 13, he destroyed twenty T-34 tanks and twenty-three additional guns. The shooter who accompanies him is called Balthasar Woll, nicknamed Bobby.

In May 1944, Wittmann was transferred to Lisieux, in Normandy, a month before the landing. Between 6 and 12 June 1944, he went to the Norman front with his 2nd company of the Schwere SS Panzer Abteilung 101. The Allied air attacks decimate his company which evolves with only six Tiger tanks. It is then reinforced by units of Panzer Lehr and 12. SS Hitlerjugend divisions.

He engaged in furious fighting on June 13, 1944 northwest of Caen, in the area of ​​Tilly-sur-Seulles. During this day, he completely destroyed the British regiment of 4th County London Yeomanry on the D175 road, near the coast 213. The fighting continued to the village of Villers-Bocage.

On June 25, 1944, Wittmann was decorated by Hitler’s hands, making him the most awarded man of any Nazi tank commander. The German staff then proposed to him to take the direction of a school of tank pilots, but Michael Wittmann refused and he returned to Normandy in July 1944, in the region of Caen.

On August 8, a new tank fight began near the village of Cintheaux. At 12 hours 55 minutes, the SS Hauptscharführer Höflinger reports that he is on the right of the tank commanded by Wittmann, in a field near the road Caen-Cintheaux when the tank of Michael Wittmann is destroyed. All of its occupants are killed instantly. After the exchange of fire between Allies and Germans, the body of Wittmann and those of the crew of the Tiger are buried next to the carcass of the tank.

The causes of his death remain unexplained: many units, such as the 1st Polish Armored Division, the 4th Canadian Armored Division or the 33rd Independent British Armored Brigade, claim the ambush that has trapped Wittmann. The official version indicates that his tank was destroyed by a bomb dropped by an Allied aircraft. The exact cause of his death fuels a real controversy.

It was not until 1983 that his body was found during the construction of a road. He and his crew are buried at the German military cemetery in La Cambe in Normandy.