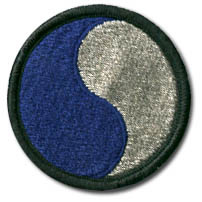 Creation of the 29th Infantry Division

The 29th American Infantry Division was founded on 3 February 1941 and brought together men belonging to the National Guard. Comprised of four battalions and based in Fort Meade (Maryland, USA), it receives from its creation a large number of vehicles and equipment freshly out of the weapons factories.

Disembarked in Scotland, the young soldiers of the 29th Infantry then rejoin their training grounds located in Tidworth Barracks, in the south of England. In May 1943, after 7 months of intensive training, the soldiers of the 29th division left Tidworth Barracks to settle in Devon. Landing exercises multiplied on Slapton Sands grounds, while in July 1943, the division received a new chief, Major General Charles Gerhardt. His deputy commander was General Norman Cota.

The landing beaches used for training were carefully selected in relation to the data collected on the beaches of Normandy. Thus, in Devon, some coasts bear many identical characteristics with the Normandy beaches.

The landing beach is named Omaha Beach (Vierville-sur-Mer) and the 29th Infantry Division is responsible for attacking to the west of the beach. She is accompanied on her right flank by the 1st Infantry Division. The assault is expected on June 6, 1944 at dawn, after a violent bombing of the German positions of the Atlantic Wall. At 6:30 on D-Day, the first elements of the 116th Infantry landed on Omaha: they were greeted by an extremely deadly fire and very quickly, the situation escaped the American soldiers.

Throughout the morning hundreds of soldiers were killed and it was only in the early afternoon that the Germans, tried and missing ammunition, gradually abandoned their fortifications and let the disembarked troops regain the advantage. US troops lose more than 3,000 men on Omaha Beach, killed, wounded, missing, or taken prisoner. It is now called “Bloody Omaha”.

The 116th Infantry was to join the Pointe du Hoc, located about 6 kilometers west of Vierville-sur-Mer, where survivors of the Rangers’ teams defended their positions, constantly attacked by German troops. For nearly three days, the 29th Infantry Division’s soldiers were slowly advancing at heavy casualties, eventually reaching Pointe du Hoc and freeing Colonel Rudder’s 90 surviving Rangers from the 225 who had landed. Were hitherto completely surrounded. Along the way, T/Sergeant Frank Peregory captures an enemy machine gun and captures a dozen German soldiers alone in a courageous action at the entrance to the village of Grandcamp.

After the Rangers were released at Pointe du Hoc, the 175th Regiment of the 29th Infantry Division headed for Isigny-sur-Mer, which it captured on June 9, 1944. The division then moved southwest , And has as main objective the city of Saint-Lô, true gateway to the south of Normandy. After heavy fighting, the city was liberated five weeks later. On September 18, 1944, the 29th Infantry was withdrawn from the front to allow his men to rest after more than three months of trying fighting. But six days later, on September 24, the division is moved along the German border.

In March 1945, the 29th Infantry Division was ordered to attack in the industrial sector of the Ruhr, where the Germans resisted fiercely despite being surrounded.
On April 24, 1944, it was the first US division to cross the Elbe River. A few days later, the Soviet troops made their junction with the 29th infantry in the same sector.
After the German surrender, on May 8, 1945, the 29th division occupied the Bremen area.

On January 17, 1946, the 29th Infantry Division was deactivated, 28,776 soldiers were killed, wounded, taken prisoner or missing.