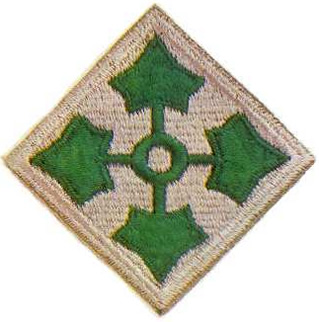 Creation of the 4th ID

The division was launched in December 1917, in preparation for sending US troops to the battlefields in France during the First World War.
In July 1918, the soldiers of the 4th American Infantry Division fought in the Marne and Aisne regions, alongside French infantry divisions.

The 4th Infantry Division was sent to England on January 26, 1944 to prepare for the invasion of Europe from the west. This assault, which must take place as part of Operation Overlord, provides that the 8th Infantry Regiment of the 4th Division attacks in Normandy a beach called Utah Beach, then joins with the American parachuted troops.

The 4th Infantry subsequently participated in the conquest of the northern part of the Cotentin, and in particular the city of Cherbourg, a major strategic element of the region by the presence of a deep water port allowing significant landings. After 26 days of fighting after D-Day, the city and port of Cherbourg are freed, but many repairs are needed before the port facilities can be re-used following the German voluntary destruction.

Thereafter, the soldiers of the 4th Infantry Division participated in the battle of Normandy towards the south-east of Normandy, in the direction of Paris. It is the first US infantry division to enter the French capital.

Then, once the city of Paris was liberated, the 4th infantry advanced towards the north-east of France.

It rejected the Germans in the direction of Belgium and Holland at the end of September 1944, when the fighting was extremely trying, mainly because of the bad weather.

The 4th Infantry Division is deployed four years from 1966 in Vietnam, where it participates in eleven large-scale military operations. Reorganized, the division became the 4th Infantry Division mechanized in 1970. And in 1995, it was based in Fort Hood, Texas (USA).
In June 2003, the 4th Division of Mechanized Infantry was sent to Iraq, where it carried out numerous patrol operations until March 2004. It is men belonging to this division who have captured the former president Saddam Hussein. The division was also deployed in Afghanistan as part of Operation Enduring Freedom.