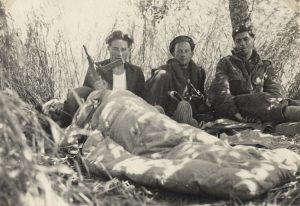 Bretons resistance fighters in the area of Saint-Marcel. Photo: DR

As part of the preparation for Operation Overlord in Normandy, the Allies are seeking all possible means to slow down the sending of reinforcements to the landing beaches after D-Day. In Brittany, nearly 150,000 German soldiers are stationed, in the immediate vicinity of Normandy.

The presence of the Breton resistance and its favorable situation attracted in 1943 the attention of the Allies who sought a valid site in order to parachute weapons and equipment or even airborne troops. A terrain is prefered: although it is very isolated in the Breton countryside, it is easy to spot by plane because it lies between a railway line and the river Oust. The land located in the region of Malestroit in Britanny is homologated by the Allies under the codename “Wale” and from May 1943, it became a D.Z. (dropping zone), which received numerous containers of weapons and ammunition.

Major Morice, departmental chief of the secret army, decides to establish his command post at the farm of La Mouette, near the D.Z. in order to coordinate the parachuting of weapons and airborne troops. With the agreement of the farmer, Mr Pondard, and all his family, this farm became the rallying point for many resistants in the Malestroit region. This place was called “La petite France” (“Little France”).

In 1940, when the Germans occupied this region with rich historical bounds, many networks of resistance were born.
The maquis of Saint-Marcel was created in February 1943 thanks to the association of other cells to be reinforced by weapons supllies. In May, they were suspended, after a few hiccups, in order not to attract the attention of the Occupier. The Germans decided to send special units there, composed mainly of Ost-Truppen: mainly Georgians and Ukrainians, but also Russians.

Saint-Marcel is a small village of the Morbihan region located about thirty kilometers from Vannes. But quickly, Saint-Marcel became the most important F.F.I. maquis (French Forces of the Interior) of Brittany, reaching up to 2,500 resistance fighters.
Why such an important maquis in Saint-Marcel? It is because of its remoteness in relation to the main roads of communication and thanks to the presence of a dense vegetation that the maquis managed to develop.

Beginning in April 1944, the Britanny resistance fighters became more and more victims of arrests and some took refuge in the Maquis of Saint-Marcel. In March 1944, several arrests disorganized the local resistance. Two gendarmerie officers were arrested, tortured and deported. Several F.F.I. were shot near Rennes.
But in early June, more than 2,000 men were under the command of Major Morice in the area of ​​Saint-Marcel.

It was at this time that the French National Council of Resistance (CNR) entrusted the Malestroit resistance fighters with the task of destroying the railway lines and the telephone lines, as well as guerrilla operations in order to weaken the Germans.

During the 4th and 5th of June 1944, on the eve of the landing in Normandy, the operations began. A coded message in French: “The dice are on the carpet”, broadcasted on June 4 by Radio-London, triggered the Green Plan. This plan aimed at the destruction of the railways. The Violet Plan, for its part, consisted in cutting the telephone lines of the enemy. Finally, the message “It’s hot in Suez” heard on June 5th, started the Red Plan, that is to say, guerrilla operations. Local resistance groups mobilized immediately, with about 3,500 volunteers.

In the early hours of June 6, 1944, while the American and British scouts jumped over Normandy, 36 commandos belonging to the 4th French Special Air Service Battalion (which would become the 2nd French Régiment de Chasseurs Parachutistes) were parachuted into Brittany. They were divided into four teams, each comprising nine personnel: two were dropped around 00h30 near Plumelec in Morbihan (operation Dingson) and two jumped over the forest of Duault in the Côtes-d’Armor region (operation Samwest).

The missions of the maquisards of Saint-Marcel and these airborne units is clear: apply the Green, Purple and Red plans, organize a base from which guerrilla actions are carried out and where they can obtain supplies and training. Finally, they must stand ready to support a possible allied landing on the Morbihan coast.

After D-Day, airborne operations took place in Brittany every night from June 9, 1944. Teams of twelve to twenty S.A.S. troops were dropped each time. These operations were obviously noticed by the Germans: the F.F.I. knew that sooner or later their base would be spotted. Consequently, they awaited with impatience the order to increase the guerrillas and to march before the Allied troops to guide them in the Breton countryside.

Finally, the second landing on the Morbihan coast did not take place. This decision was communicated to the resistance fighters by radio message and the dispersion of the units was immediately ordered. If battle was to be avoided at all costs, Major Bourgoin was nevertheless instructed to multiply the guerrilla actions. He then decided to disperse the F.F.I. and S.A.S. units throughout the department in order to accentuate the feeling of insecurity for the German troops in Brittany.

In order to maintain the continuity of the resistance actions with the survivors of operation Samwest and in order to reinforce in number and in means the forces of Saint-Marcel, the French S.A.S. launched Operation Grog, led by Captain Deplante. Operation Grog held until the general insurrection in August 1944, after the breakthrough of Avranches carried out by the Americans.

At dawn of 18 June 1944, an advanced F.F.I. post opened fire on two German patrol cars likely to be in reconnaissance to seek intelligence in this area where many parachute drops were noticed. One of the Germans managed to escape and gave the alarm.

Believing that they had only a small number of maquisards in front of them (in reality the camp was defended by 2,400 resistance fighters), 200 Germans from the Malestroit garrison arrived at nine in the morning and advanced in single file. They were quickly caught under the fire of maquisards machine-guns and suffered very heavy losses. A second German attack began at ten o’clock. Once again, German victims were numerous. Bourgoin then requested immediate radio assistance from the Allies.

At about two o’clock in the afternoon, the Germans resumed the offensive. Allied aviation, represented by four P-47 Thunderbolt fighters of the U.S. Air Force based in Normandy, intervened at 15:30, sowing panic among the Germans. Resisters took advantage of this to reorganize themselves. However, after the departure of the planes, the attack resumed, even more intense. The battle was terrible.

When night felt, the fighting ceased gradually. Resisters knew that the fighting would resume the next day and that their opponent would have reinforcements much more important, those of the artillery and especially the armored ones.
The decision to disperse the French base, before it was completely encircled, was thus taken around 10 pm. 2,000 men disappeard in the night, returning to their original maquis. Before deserting the site, paratroopers S.A.S. French remained to cover the withdrawal of their comrades, blowing up three tons of explosives and ammunition.

During this battle of Saint-Marcel, about thirty F.F.I. and six S.A.S. paratroopers were killed. On the German side, losses were higher: estimates range between 300 and 600 killed. What is certain is that the Germans underestimated the size of the French forces and their defensive capacity.

On the day of June 19, the Germans discovered a totally empty camp. Out of spite, also from vengeance, they executed the wounded whom they discover hidden in the farms in the neighborhood. They hunted “terrorists,” constantly searching the villages and forests, arresting or massacring those who have not been able to escape on their approach, persecuting the civilian population, torturing and murdering.

This genuine hunt for “terrorists” was launched without the slightest pity by the Gestapo, the militia, a squadron of Ukrainians and a battalion of Georgians in the pay of the Nazis. Both of them sow terror among the population. They burnt the farms and the village of Saint-Marcel. Only the buildings of the church, the presbytery and the schools of the village were spared.

On July 12, 1944, a little less than a month after the attack of June 18, the German soldiers discovered (informed by the Gestapo) the command post of the cell Dingson led by Marienne, located at Kerihuel near Plumelec. Captain Marienne, as well as 17 brothers in arms (six paratroopers, eight resistance fighters and three farmers) were shot at dawn. This is the sad end of the maquis of Saint-Marcel.

The balance of operations in Saint-Marcel

With the battle of Saint-Marcel, the Germans discovered the existence of well armed and framed forces, in permanent relation with the Allied General Staff, which inflicted serious losses on them. As for the Allies, this battle tought them that the clandestine armed struggle can not be organized from a permanent base.

The fighting of Saint-Marcel had a great impact in the Morbihan. Indeed, for the first time in France after the liberation of Corsica, the Germans were stopped by the local resistance. The German forces participating in the fight against the resistance networks in Brittany were not sent as reinforcements in Normandy against the Allies.