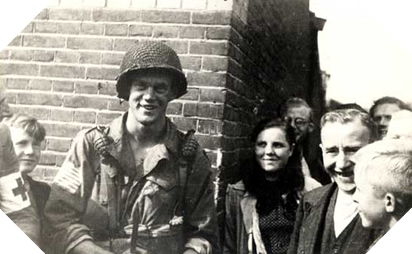 David Webster had just completed a major year at Harvard University when he joined the airborne troops as a volunteer in 1942.

He trains with the 506th Regiment in Toccoa, but not in the Easy Company. He was parachuted in Normandy on June 6, 1944 with the Second Battalion of General Staff. But during the fighting, David Webster is wounded and evacuated to a hospital in England.

He joined Easy in Operation Market Garden and was again wounded in October 1944. He misses the Battle of the Ardennes and finds his comrades from the E-Company in the Alsatian town of Haguenau.

The actor Eion Bailey in Band of Brothers