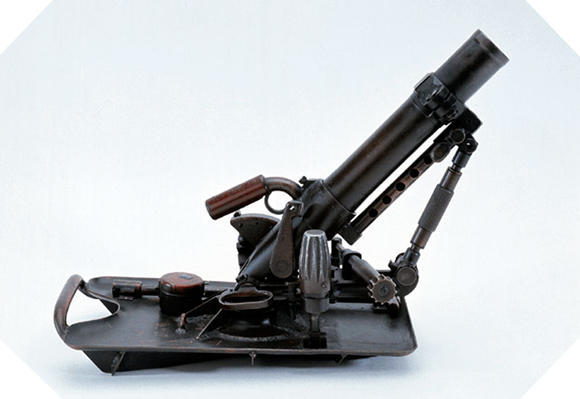 Shortly before the start of the Second World War, Germany wanted to equip its infantry with light mortars in order to reinforce its firepower, in particular to project grenades at a greater distance. In 1934, the company Rheinmetall-Borsig AG began the study of a new model of a 50 mm caliber and weighing 14 kg. This mortar comes into service two years later and adopts the name “5 cm Granatwerfer 36″. Carried by two soldiers, it allows indirect shots up to 500 meters.

Infantrymen consider, as and when they are used, that the use of this mortar is too complicated, in particular because of a sighting system difficult to understand. In 1941, its production ceased after the successive engagements on the front of the west and the east, its results being considered insufficient, in particular its scope. German soldiers re-use the 50-mm mortars taken from the French and Soviets.

Used to arm certain defensive positions on the Atlantic Wall, particularly in Normandy, the Granatwerfer 36 also equips the German infantry during the fighting following the Normandy landing. It is gradually replaced by the kurzer 8 cm Granatwerfer 42 but remained used until the end of the war in May 1945.