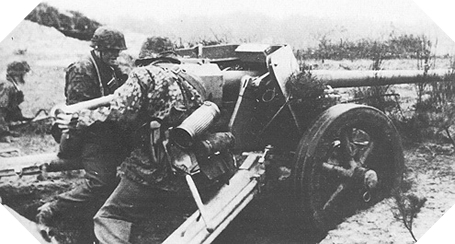 It was with the arrival of the Russian T-34 tank that the study of an anti-tank gun was increasingly pressing for the German army on the eastern front, which until then had no No light artillery capable of stopping these new enemy tanks. It was necessary for Germany to develop a powerful anti-tank gun as quickly as possible.

The study of the 75 mm cannon Pak 40 began in the summer of 1939, at the beginning of the Second World War in Europe. After the validation of the main prototype and the launch of large-scale production (carried out in particular by the German firm Rheinmetall), this canon entered service in November 1941.

Sent immediately on the eastern front, the Pak 40 is an excellent anti-tank gun, very quickly dreaded by the Soviet armored divisions. Its remarkable efficiency has prompted German engineers to reuse the Pak 40 gun on the armored tanks being created.

Capable of piercing a 120 mm shield at a distance of one kilometer at a very high rate of fire for the time, the Pak 40, used on all fronts of the Axis and especially during the Battle of Normandy, emerged as one of the best canons of the entire Second World War, after the formidable 88 mm gun.