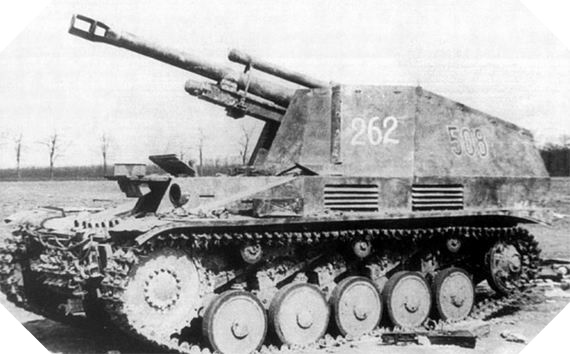 At the beginning of the Second World War, the Germans were faced with the difficulty of advancing artillery at the same rate as armored vehicles and infantry. Hence the idea of ​​reinforcing the armored vehicle fleet of self-propelled guns to ensure continuous support to the assault units while allowing to reinforce the firepower during the fixed or defensive phases.

To this end, the Germans reuse the chassis of the aging Panzer II Ausf. F to install a powerful 105-mm artillery gun (the FH 18) in a superstructure protected by a frontal and lateral shield. The first specimens were produced in February 1943 and knew the fire baptism a few weeks later on the eastern front. The production of this self-propelled gun nicknamed “Wespe” continued until 1944 and put an end to the construction of the Panzer II as a battle tank.

Deployed within artillery regiments, the Wespe are particularly appreciated for their mobility and firepower capabilities. Some Panzer II are also modified in transport of armored ammunition, without barrel but with the protective shield of the Wespe.