History of the Churchill Crocodile tank – Hobbart’s funnies in 1944 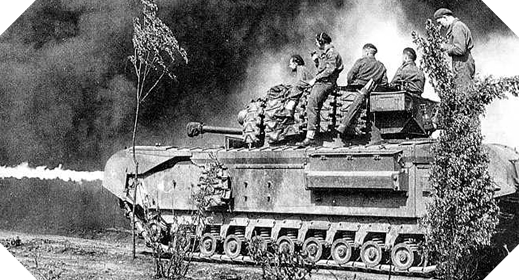 The chassis of the British Churchill tank, as well as that of the American Sherman, serves as the basic structure for many other versions (flamethrowers, anti-mines, bridges …) used by the British forces during the Normandy landings and better known as “funnies”. These engines, devised by the English general Percy Hobart, must improve the capabilities of crossing and support fire to the benefit of Allied land forces.

In 1943, the British military engineers developed the flamethrower model of the Churchill tank, called Crocodile, capable of producing a flame that springs about ten meters in line with the vehicle. These flames allow the Allies to destroy enemy shelters and bunkers without necessarily appealing to the demolition teams of the infantry.

The first unit to be equipped with the Churchill Crocodile is the 141st Royal Armored Corps, shortly after the Normandy landing.