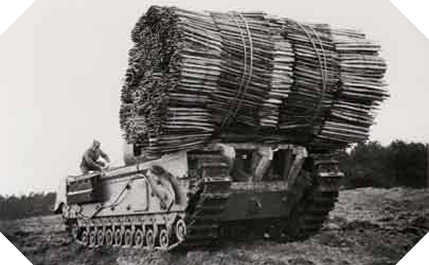 The chassis of the British Churchill tank, as well as that of the American Sherman, serves as the basic structure for many other versions (flamethrowers, anti-mines, bridges …) used by the British forces during the Normandy landings and better known as “funnies“. These engines, devised by the English general Percy Hobart, must improve the capabilities of crossing and support fire to the benefit of Allied land forces.

Thus the Churchill Fascine tank was born, its principle of use goes back to the First World War, when the infantry and the tanks had to cross quickly the trenches: a tank, equipped with a cylinder around which is wound A dozen meters of wooden planks, unrolls his cargo inside a ditch.

The ditch is thus filled, the tank and the infantry can immediately cross.

The Churchill Fascine tank is one of the “funnies“, a nickname given by the British and American military to the engines invented by the British General Percy Hobart and intended to best support the land forces during the landing of Normandy.