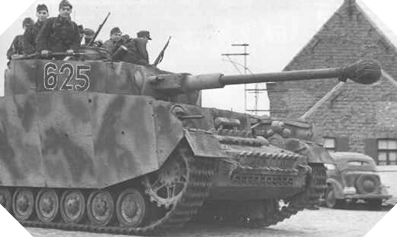 The Panzer IV tank was designed by German engineers before the start of World War II in Europe in 1935. Produced from 1936 onwards, this tank was initially intended to provide support for infantry actions but From its first use in combat (first on the eastern front, then to the west and then during the Mediterranean campaign), it appears as a real tank destroyer, despite the weakness of its armor.

Beginning in 1942, numerous modifications were made to the Panzer IV, in order to concentrate its use on anti-tank struggle. Thus, more than a dozen models are produced by German weapons industries.

The main changes are based on the various lessons learned from the battles in Poland and France, in particular: the armor is reinforced and its use is extended to various missions.

More than 7,000 Panzer IVs were built throughout the Second World War. It is one of the cheapest tanks in Germany (103,462 Reischmarck, less than half the value of a Tiger tank).

The J model of the Panzer IV class was the last product during the Second World War: the length of the barrel was increased as well as the thickness of its armor.